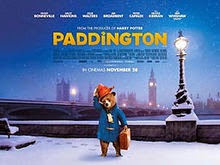 Adults will no doubt spot themes of inclusion, and a message against all the fuss over immigrants. But for the little ones this is pure unapologetic fun. I’m going with three-and-a-half out of five for Paddington. It’s warm and full of affection; a film you shouldn’t miss.

Paddington is a heart-warming family story but it ultimately succumbs to the Disney template with a happy ending that’s unbearably sweet. Paddington also imparts practical life lessons in a way that is neither patronising nor insulting to the intelligence of kids.

Based on the series of children’s books by Michael Bond, Paddington tells the story about a young Peruvian bear who travels from his native rainforest in South America to London, where he attempts to find himself a new family to live with. The seamless blending of animation with live action is the most striking point in the film. Apart from gently delivering the message about the importance of belonging, the jaunty film score also keeps things moving along rather nicely. Fun family viewing.

The film has a full compendium of British veterans, and superbly combines live action and animation. Bonneville and Hawkins make a great pair, and Kidman makes evil . Apart from all the comments about the weather and the rain, you get the plummy accents, and that very old-fashioned construct : civility and niceness. The film does a subtle transfer of the lump-in-the-throat message of the beloved book : you can be different, yes, but you can find a place to call your own. And a cuddly bear to bring it home.

This is a fantastical story but the emotions are real and the adventures engaging. King along with his writing team uses Paddington’s arrival to highlight what it feels like to be an immigrant in London, more so the trepidations of an outsider looking for a home in any big, unknown city. “In London, everyone is different, but that means anyone can fit in,” says Paddington. It’s a universal issue depicted with such subtlety and sincerity that you can’t help but be moved.

There is no reason you shouldn’t watch Paddington. If you are a skeptic, thinking that this is a children’s film that won’t appeal to you, then you are wrong. This movie packs so much soul that it deserves to be watched more than once. It is the perfect family entertainer that cannot be missed.