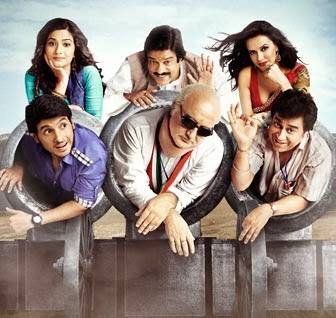 From All the  reviews on the web
Showing Top 9 Reviews

Much of the second half is evidently inspired from Jaane Bhi Do Yaaron, but there is none of that film’s sparkling wit at display here. The final scenes are unabashedly schmaltzy, and while the message itself is important, it is conveyed with all the subtlety of a sledgehammer.I’m going with two out of five for Ekkees Toppon Ki Salaami. Promising but doesn’t quite take flight.

On the whole, Ekkees Toppon Ki Salaami is an entertaining, message-oriented film with a strong emotional base. It has merits but due to its very poor initial, dull promotion and dull pre-Diwali days ahead, it will go largely unnoticed. Even positive word of mouth will not help much so that the film will turn out to be a resounding flop.

Ekkees Toppon Ki Salaami is a fitting tribute to the common man who still values his self-respect more than his pay cheque. In times where materialistic things have taken precedence over people and good old values, ETKS is one of the most socially relevant films to have come out this year. It’s not just a film but a philosophy.

A vague reminder of another Anupam Kher classic, Khosla ka Ghosla, Ekkees Toppon ki Salaami may not be fast paced but you never really wonder about how long it will take to end. Similarly, some twists are predictable but the overall feel-good factor keeps you glued to your seats. Slightly substandard background score and cinematography mar this otherwise almost flawless film.Ekkees Toppon ki Salaami is one of those films that you can watch over and over again. Extraordinarily ordinary and proud of it, Ekkees Toppon ki Salaami reminds us of the important things in life in a highly consumerist world.

EKKEES TOPPON KI SALAAMI is a satirical attempt at today’s commercial world that is interspersed with politics, power, greed and lust. This is one film which will make you laugh… laugh at the system and then laugh at yourself. The on-screen characters seem absolutely straight out of everyday life for they are the ones who do not need any make up to ‘highlight’ their roles. These are the characters that are very much a part of everyone’s day to day life. On the whole, EKKEES TOPPON KI SALAAMI has a unique storyline and good performances while makes it an entertaining watch.

The first half is high on drama whereas it is the second half that takes you through a roller coaster of a ride which is full of laughter and thrill. There will be points in the second half where you will jump out of your seats with laughter. The message given via the film is very deep rooted but they have presented it in a humorous way and that keeps the momentum lively and doesn’t allow it to become boring at any point.

the first half of this film tries to be something which it clearly isn’t — with a mash-up song video featuring Neha Dhupia — and sloppy screenplay. It’s only minutes before intermission that the story picks pace and doesn’t wobble even for a second from then on. What works for Ekkees Toppon Ki Salaami is that it has something new to say about this city’s old ways of being. And that’s certainly worth the two-hour-plus runtime.

Neither is Ekkees Toppon Ki Salaami unbearable, nor is it a good film by any standards; it’s somewhere in between. If your idea of going for a film is to get entertained and have a good time, then this is not something you would want invest your time in.

Ekkees Toppon Ki Salaami is not brilliant but somehow it wasn’t too bad either. It is semi watchable and despite its preachy tone, it survives your attention for being essentially noble at heart. I went with far too low expectations and hence probably came out to be a pleasant surprise. If you’re a movie buff who watches every film, this one wouldn’t be too much of a time waste.