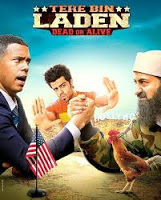 Sequels always run the risk of falling short of expectations. In 2010, Tere Bin Laden emerged as surprise hit with its abundant laughs and particularly smart writing. This time director Abhishek Sharma is hardly able to conjure up an equally enticing story. The chuckles are fewer and the wit from the first part is nowhere to be seen.The humour is rather low-IQ and most gags are far from enjoyable. The laughs are fewer and restrict themselves primarily to the first half.

The one actor, hard to recognize under all the make-up, who proves to be a complete funster is Sikander Kher in a ‘double-role’: as the Yank operative assigned to the Osama job chewing on a broad accent which doesn’t drop, as well as the pot-bellied Hollywood ‘producer’ David Chaddha, he is a hoot. ‘Tere Bin Laden’, Part 2, generates start-up potential, some smiles, some laugh-out-loud lines, but it keeps petering out.

Absurdist comedies are always difficult to pull off because the line between the droll and the dreary is often dangerously thin. Tere Bin Laden: Dead or Alive, is seldom on the right side of that line. For want of the inspired writing that launched the franchise, it rests mostly on deadwood ideas that are as insubstantial as they are prone to rapid disintegration. Tere Bin Laden: Dead or Alive is best avoided unless a bunch of characters running around in circles is one’s idea of entertainment.

In his excessively boisterous follow-up titled Tere Bin Laden: Dead or Alive, most of the original’s key characters, including the one-trick pony Pradhuman Singh, return for yet another misadventure. Except the jaunt is no fun in the absence of novelty, wit and spontaneity.If intended to be a spoof on the vagaries of filmmaking, Tere Bin Laden: Dead or Alive is completely devoid of whimsy.And, if it aspires to be a satire, there’s little bite or ambition in its pedestrian approach and trivial resolutions.

On the whole, TERE BIN LADEN DEAD OR ALIVE doesn’t live up to the first part. It offers you patchy entertainment. At the ticket window it will not enjoy an overwhelming word of mouth. If you don’t have anything else to do, you can check it out else wait for the satellite premiere.

This sequel to Tere Bin Laden, connects the two films smartly. Also, with all its silly antics, the film comes off as a much better act than its prequel.In parts, the film drags, thus killing the intended humor. In the second half, the makers run out of good jokes. If you have a taste for comedy films which could be branded silly in caps, this is your pick! This is a no-brainer that promises partially a good time.

While the funny scenes are plenty, there are also moments that don’t take off, especially the track with local terrorist leader Khalil. Ali Zafar’s cameo also doesn’t do much to create any interest in the film. In fact it serves as a distraction from the main plot. The jokes and gags are at times repetitive and revolve around Osama and President’s scenes. The challenge was to rise above the brilliance of the first part and retain the essence of the plot. Unfortunately Dead or Alive is stuck somewhere in between.

The film again, in the garb of humour, suffers from illogical sequences. An aspiring filmmaker can’t distinguish between terrorists and filmmakers. An American agent masquerades as a filmmaker to get proof of Osama’s death, alas stupidly depends on a filmmaker to achieve his goals. And a chopper is attacked, crashes and everyone comes out unscathed. Cars fly too in a Rohit Shetty film but last I checked, Tere Bin Laden: Dead or Alive was marketed as a satire rather than a no brainer of a comedy. The plot of an Osama doppelganger torn between Americans and terrorists is funny indeed but loses punch because of lazy writing and loud performances

But the show belongs to Paul, Singh, Kher and Mishra. These four actors took it upon themselves to make this comedy a glorious rip-roaring affair. While Kher had a tendency to lean towards caricature, the relatively unknown Singh is spot on with his Punjabi accent and expressions. Paul does his bit to make this film immensely watchable. Watch this if you are in the mood for some light-hearted fun about war, terrorism and the highly exaggerated world of Bollywood.

A Bollywood director is hired by an American talent agent to make a film on Osama bin Laden. The plan to use an Osama doppelganger in order to prove his death boomerangs when a Taliban arms dealer hijacks their idea to prove he’s alive.