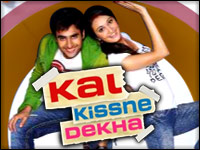 From all the reviews on the web
List of Kal Kisne Dekha Reviews
Showing 4 reviews Ratings: 2/5 Reviewer:Taran Adarsh Site:Bollywood Hungama

KAL KISSNE DEKHA walks on a tight rope. The writers could’ve explored the concept to the optimum, making their imagination run wild. But what eventually unfolds is just not exciting. It catches your attention at times, but gives away later.On the whole, KAL KISSNE DEKHA has a great body [grandiose production values], but lacks soul. Given its slow start, the film will have to rely on word of mouth to attract the youth, its target audience, during its opening weekend.

Kal Kissne Dekha is made from the pocket and not the heart. The eye-watering foreign locations, the slick production values – they don’t distract your attention from the painfully predictable script and the amateurish execution.Kal Kissne Dekha is much like those bad ‘90s potboilers that we’d be happy never to revisit again. I’m going with one out of five for director Vivek Sharma’s Kal Kissne Dekha. Send your enemies to watch this one!

Come on, you can’t really expect to discuss Kal Kissne Dekha as if it was an actual film, can you? Please. It’s unfair to the kids, who, based on what has released in theatres today, clearly have no business being lead actors of a movie. Forgive them, for they know not what they do. Kal Kissne Dekha is one of those films that won’t suffer at all from bad word of mouth. Those who’ve watched it aren’t likely to admit it in public, is all.

In terms of packaging and styling Kal Kissne Dekha is stuck in the OTT 90s. The music is melodious but the songs crop up at all wrong places. You know the direction is listless when audiences can sense the arrival of a song in the plot. As the first release post the multiplex strike, Kal Kissne Dekha is more like a film from the past than a futuristic one. All the efforts put in by the fresh pair are watered down by the directors’ predictable approach.Sincere first time efforts by Jackky and Vysalee get wasted due to the director’s dull execution..