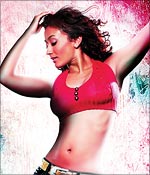 From all the reviews on the web

The film bears an uncanny resemblance to Ramgopal Varma’s immensely likable RANGEELA and Yash Raj’s utterly forgettable AAJA NACHLE. No issues if LET’S DANCE seeks inspiration from elsewhere [coincidence?], but in an effort to showcase Gayatri’s dances, the remaining aspects take a backseat. The dances appeal, but the love story doesn’t. And the crime angle, injected in the plotline, is a big bore. On the whole, LET’S DANCE is too ordinary, with its share of limitations.

The film is actually sweet and sensitive and gently tugs at your heart with the recognisable stories of the dreamers who make up the fabric of Mumbai. The actors too play their part well, though one wishes the music and the dancing had more verve in it. Specially since the sundry reality shows on television have already showcased the wealth of dancing talent that throbs in anonymous India. A little more polish, a little more zing and you could have had a decent musical at hand.

The film is high on dance but low on emotional connect. There’s a dance at the drop of a hat and then a song at the blink of an eye. The direction appears corny at several instances like when the couple fancies Nasik dhol dancers in background as cupid strikes. The music isn’t bad but lacks soul. The songs stay with you till their runtime after which there’s no recall value. The writing is conventional and some characterizations are even flawed like RJ who is principled at the start but is shown a philanderer soon after. The tempo picks up only in the final reels but the climax is long-drawn-out.

The leading lady appears to have given this role her all but since the film lives and dies with her performance and her character’s journey, she doesn’t quite prove up to the task. She dances, but doesn’t own a single move that looks capable of sticking in a viewer’s head. Being weighed down by lengthy dialogues that she clearly couldn’t keep pace with (as evidenced by the tedious dubbing) doesn’t help. The effort is clearly visible which might be part of the problem, because even the casual movie viewer can probably tell when someone is trying too hard.

Even if you ignore the various films from which Let’s Dance draws inspiration, the movie itself is a lesson in how films should not be made.For starters the star of this film could have definitely done with some dance lessons.There is no story to speak of and the direction is almost non-existent. And that is very sad because Aarif Sheikh who has directed this disaster, has also edited movies such as Maqbool and Parzania.Let’s Dance is so bad, they could have well called it Let’s Get the Hell Outta Here.