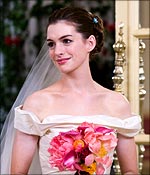 There’s nothing more infuriating than watching two perfectly sensible grown women behave like spoilt brats.It’s all very tiring and not particularly funny because the writing is so uninspired and dull – there’s no clever repartee, and never an engaging battle of wits between the ladies.I’m going with one out of five for Bride Wars, it’s predictable and boring and quite honestly, if I wanted to watch a catfight, I’d watch a real one that isn’t scripted – not so poorly anyway.

Sitting through this slight film (barely touches the hour-and-a-half mark and still manages to feel too long) one is forced to wonder what prompted the lead actresses to sign on for this project. Boredom? A fat pay cheque? An empty box on their career checklist? Coercion? A contract that needed to be honoured?.As redeeming qualities go, this movie has none. It sounds like a decent idea and perhaps there is a good movie somewhere in the ether with this exact same premise. Bride Wars is not that film.

Wedding ‘chick flicks’ never fail to amuse you – they are so clichéd it makes you cringe. But they’re still enjoyable if they get the mush, comic timing and dialogues right. If not, the film is nothing but a drag and helps you have a good nap in the cinema hall.Kate Hudson and Anna Hathaway star in one such forgettable film called Bride Wars. Well, Bride Wars’ script had ample scope to include some great moments of friendship and love, and some funny ones as well. It fails because it’s half-baked. The passion of director Gary Winick doesn’t come across, if ever there was any.

Bride Wars is a film that is bound to take you by surprise because it is not all that cheesy as its title. Of course there are those regular ‘chick flick’ ingredients (read gossipy bitchy women indulging in catfights) in it but at the end of the day the film entertains so what the heck.The friendship between the two which has shades of jealousy, love, envy, insecurity all in one makes the film look real in spite of its juvenile supposed funny moments. Watch it to get entertained and take your best friend along!