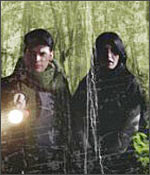 KARMA – CRIME, PASSION, REINCARNATION seems inspired by KUDRAT, but the problem is that the film doesn’t have the power to hold your attention after an interesting start. At best, it works in bits and patches, that’s it!.The viewer can sense, much before the film has ended, who the culprit is, which is bad news for any thriller. Also, the flashback portions are just not convincing.On the whole, KARMA – CRIME, PASSION, REINCARNATION appeals in parts, but that’s not enough.

The film has been doing the rounds of the international circuit and has created an impact at sundry film festivals. Quite understandable, since it markets the eternal Indian tale of rebirth against a sylvan backdrop of the picturesque hills and tea plantations of Ooty. The story may be archaic, but the film carries you along with its thriller pace, its twist in the tale and the visual splendour of splendid Ooty.

Karma commits the cinematic crime of reincarnating an ancient Bollywood formula sans any passion or innovation. The punar-janam plot has been witnessed enough and more times on the Indian screen from Madhumati to Om Shanti Om but this one lacks any novel interpretation and is rather a direct spin-off from Chetan Anand’s 1981 film Kudrat. Karma is age-old Bollywood masala, simply served with a cross-country cast and setting. Even the Cannes consent mark doesn’t help.

Some movies are quite thought-provoking, some leave you thoroughly entertained, some scare you to the point where you can’t go to the bathroom at night, and some invoke an emotional response. Karma does none of that. But having said that, the film is a good one-time watch if you have time to spare.The climax is unexpected and the film ends with a flourish. Crime, passion, suspense and well developed characters mark this short film.After doing the rounds of international film festivals and winning a bunch of awards, Karma releases in India today. Watch it if you enjoy short films and don’t mind a slightly predictable storyline

Shahjahan knows exactly what he’s doing with the story, which has been deftly crafted by Vivek Singhania and Amit Mehra. The dialogue is crisp and fresh and wonderfully devoid of cliches. Alexandra Wedenig is spot on with the editing, and everything about this film seems right.Karma: Crime, Passion, Reincarnation is neat little thriller with reincarnation as its central theme and everything going for it. Go for it.