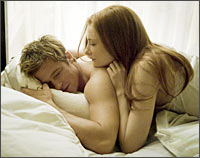 List of The Curious Case of Benjamin Button Reviews

Because it’s long-winding and often dull, and because it largely fails to marry the storytelling with the special effects, I’m going with two out of five and at best an average rating for director David Fincher’s The Curious Case of Benjamin Button; you’ll discover it never touches your heart because its missing a heart of its own.

The Curious Case of Benjamin Button is a movie you have to watch at least once, if only to see what all the fuss is about. It is impressive what the filmmakers have managed to commit to celluloid in the name of realizing the fantasy that was first committed to paper as a short story by F Scott Fitzgerald in the 1920s.Watch this one to see how filmmakers can use technology to build far more fantastical worlds than we are used to imagining. Then discuss with your friends how you would have done it differently.

The curious case of Benjamin Button is a moving saga which talks about life, death, relationships and how one can make the most of his life in spite of all the odds. The climax will leave you speechless and the film will haunt you much after you leave the theatre. The film may not be ‘entertaining’ to be precise but keeps you engaged throughout as the characters keep exploring themselves and so does the narrative.This tale of impermanence and emotional pain is a master-piece, a film that will linger in your mind forever for its cinematic and artistic brilliance.

This almost clinical approach to the story kills it so brutally, you begin to wonder just why the movie has received so many Oscar nominations.Brad Pitt does a great job, but the prosthetic guys have done better. Screenplay wise too, the film is a far cry from the original short story.We’ve seen much better of Brad Pitt than The Curious Case of Benjamin Button. Watch this one on DVD, you wouldn’t have missed much.