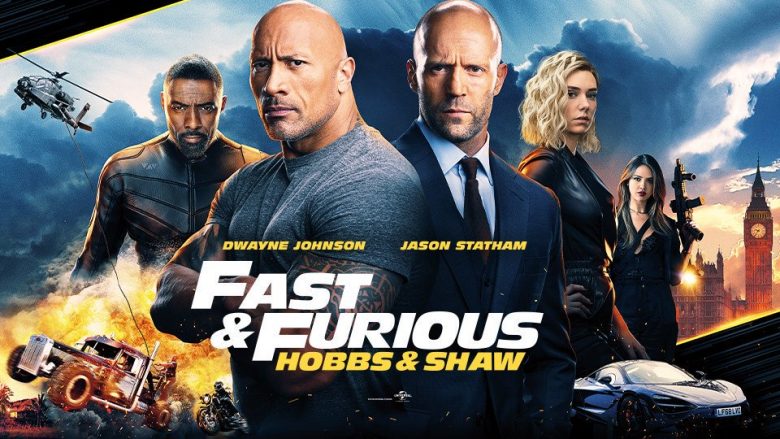 Hobbs & Shaw is pure popcorn entertainment. Nothing more, nothing less. It’s a tad long at 2 hours and 16 minutes, but its winning cocktail of action and comedy, and the screen-burning appeal of Dwayne Johnson and Jason Statham seldom leaves you bored. I can’t think of two other actors who could’ve made such flimsy material work.I’m going with three out of five for Hobbs & Shaw. It’s what the word ‘time-pass’ was invented to describe.

An absolute joyride… Eye-popping action with a stunning finale… There’s more: humour, emotional moments and the terrific trio [The Rock, Jason and Idris Elba]… This one Rocks!

The script is cheerfully silly and honestly, the lack of logic hardly matters. When you go into a Fast & Furious film, you know exactly what you are signing up for. But at 135 minutes, the last stretch becomes an endurance test. The action is offset by family subplots. The franchise traditionally comes with Karan Johar-style messaging about loving your family. Here it just adds to the length and wears your affection thin. But props to the team for taking the climax to Samoa – I’m assuming it happened because that’s where Dwayne Johnson is originally from. At least the backdrop is scenic and the weapons are unique. Hobbs also does some deadly Samoan war cries. There isn’t anything particularly memorable about Hobbs & Shaw but I think the film does an efficient job of being mindless entertainment. It goes well with over-priced caramel popcorn.

On the whole, Fast & Furious: Hobbs And Shaw is a hit, no questions asked. It has exciting action, entertaining comedy, and an engaging drama to keep the audience totally happy. The dubbed version, alongwith the original English version (also released simultaneously), will do fantastic business at the box-office.

There is a lot of silly stuff that happens in the Fast & Furious movies, and the silliness is mostly intended. No one watches these films with any arthouse ambitions. Hobbs & Shaw, the latest instalment in the franchise, laser focuses on the daftness, doubles down on the humour, and delivers a fairly watchable action comedy. If you are in the mood for the very definition of lock-your-brains-at-home, popcorn fun, this is the film to watch this week. Just do not expect absolutely anything more.

Hobbs and Shaw is so heavy in action, which is what we cared for initially, that you would look for occasional kisses or maybe a dance number. Instead, you get Roman Reigns maneuvering his way to the camera with a spear in hand.Anyway, it delivers more than what it promises. It’s a solid adrenaline-pumping film with an unwavering focus. It’s pure fun and you don’t even need to bother about what The Rock is cooking.

From the outset, director David Leitch sets the tone of this film apart from the rest of the franchise by giving it a distinct spy-thriller-action vibe. Driven by the alpha vs alpha battle between Johnson and Statham, the humorous banter keeps the momentum going when the action takes a breather. This comes in handy since the action is absolutely outrageous in the best way possible. Each set-piece is worthy of being a showstopper in itself. Sure, it goes to bonkers levels in the climax, and that’s when you may tune out, especially when there’s an unnecessary romantic angle thrown in. But the undeniable chemistry between Johnson and Statham drives the first couple of acts nicely.

The emotional angle somewhere falls flat, because it has very less meat to make a strong subplot. The whole ‘mankind is in danger’ stuff is now done to death, but the film finds its solace in the lead pair’s bicker and banter. From hanging people through the windows to crashing cars in them, the less we talk about the action the better. Because it’s something to witness for and imagine how many crazy minds could get together to imagine that level of craziness. All said and done, there is one post-credit scene in the film, don’t miss that. Breathtakingly spectacular action sequences backed up by an intriguing storyline makes this a mandatory big-screen (preferably IMAX) watch.

Director David Leitch, whose last outing was Deadpool 2, combines fast action with witty dialogue to give us a leave-your-brains-behind kind of entertainer. The chase sequence in London, involving supercars and superbikes will give you an adrenaline rush like never before. And the climax involves some four trucks tied together flying behind a helicopter. The film doesn’t care either for human biology or Newtonian physics. Shaw and Hobbs are subjected to some insane levels of battering.

Ever since hulking lawman Hobbs (Johnson), a loyal agent of America’s Diplomatic Security Service, and lawless outcast Shaw (Statham), a former British military elite operative, first faced off in 2015’s Furious 7, the duo have swapped smack talk and body blows as they’ve tried to take each other down. But when cyber-genetically enhanced anarchist Brixton (Idris Elba) gains control of an insidious bio-threat that could alter humanity forever — and bests a brilliant and fearless rogue MI6 agent (The Crown’s Vanessa Kirby), who just happens to be Shaw’s sister — these two sworn enemies will have to partner up to bring down the only guy who might be badder than themselves.