Performance-wise, child star Mckenna Grace does a fine job with her restrained act even during the most horrific turn of events. Rest of the cast plays along well. Vera Farmiga and Patrick Wilson have limited screen time, but with so much nonstop action, their absence is hardly felt. The Victorian setting of the Warren home and the subtle dark colours add oodles of spookiness to the proceedings. Overall, ‘Annabelle Comes Home’ is a textbook scarefest that delivers on its promise to haunt, without being complicated or preachy about Gods and demons.

The difference between a good horror film and a bad one, since Dauberman has been involved with both, depends squarely on the antagonists. And tellingly, Annabelle has absolutely no agenda whatsoever other than slipping into children’s beds and perching on a rocking chair from time to time. Now compare that to Pennywise, who had a dense backstory and a compelling modus operandi, in addition to a creepy physical appearance. But by voting with our hard-earned money, we’ve given our approval to the Conjuring Universe and its unambitious brand of horror. Don’t expect a severe course-correction anytime soon.

Annabelle Comes Home drags on and on without turning up the chill factor, you wonder whether Dauberman, directing for the first time but a well-settled collaborator in Conjuring films, has run out of scares. Only in the last 20 minutes or so does the film seem to realise how much time has passed, and goes on to pack in a series of bizarre attacks while avoiding any real damage.The most disturbing aspect of the film isn’t even talked about. Which parents, that too psychics, leave their young daughter alone in a house full of evil, with a teenage babysitter, and not call back to check? An easy answer is that Judy is around for a reason — all the better to keep Annabelle alive.

Despite being the origin story, Annabelle Comes Home lacks the innovation. It’s a pretty straight forward tale of werewolves coming out of thin air and screaming their lungs out up close. The countryside set up which added dimension to the earlier films is a hindrance here as there isn’t much to distract the audience who keep waiting for something unique to happen. Annabelle Comes Home may not jolt you the way the previous Conjuring films did.

Determined to keep Annabelle from wreaking more havoc, paranormal investigators Ed and Lorraine Warren lock the possessed doll in the artifacts room in their house. But when the doll awakens the room’s evil spirits, it soon becomes an unholy night of terror for the couple’s 10-year-old daughter, her friends and their young baby sitter. 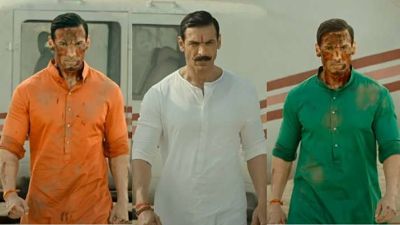