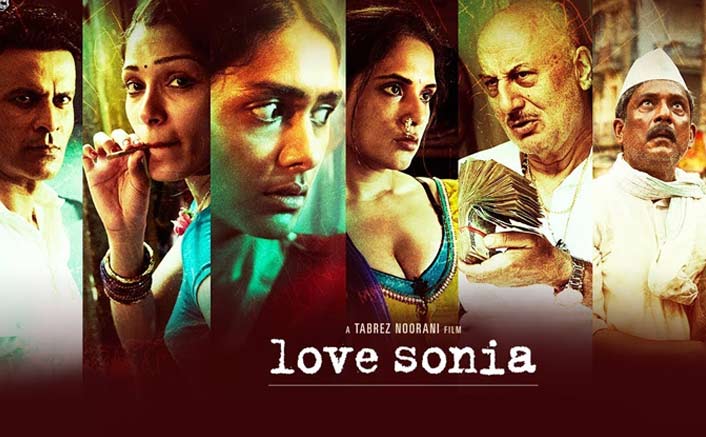 Ultimately Noorani has crafted a powerful film that you won’t be able to shake off immediately. It puts the horrors of confinement and abuse front and center, and compels you to feel everything from sympathy to shame. I’m going with three-and-a-half out of five.

But despite the talent and the good intentions, Love Sonia trips in the second half. The story moves from the gullies of Mumbai to Hong Kong and eventually to sprawling mansions in Los Angeles. But this doesn’t have the same authenticity and impact as the Mumbai section. The characters have little depth – Demi Moore and Mark Duplass make a cursory appearance. The plot feels like it is designed to reflect newspaper headlines and everything gets resolved so easily that it seems implausible. But Sonia’s tortured face will haunt you.

On the whole, Love Sonia is a very well-researched, well-written and well-made film with excellent performances. But it is a depressing fare, at the end of the day. Hence, despite noble intentions, it will not find favour with the audience.

The trafficking of girls keeps returning as a theme in films. How village ingénues are lured to the red-light areas, how they are beaten and threatened into submission, and how they survive, are familiar tropes. Love Sonia revisits the territory with an interesting cast, but doesn’t come up with anything remarkably new, plot-wise, or treatment-wise, ending up like a latter-day Salaam Bombay.

However, while the film works well on an awareness level and has a certain shock value, it isn’t emotionally compelling. The bond between the sisters isn’t established enough for you to feel for their separation. A powerful Marathi film Doghi, conveyed this emotion masterfully. Also, what bothers you the most here is the story’s deliberate and predictable nature. It doesn’t unfold organically. For the first few scenes, the girls seem like they are ‘acting’ naive. Situations look like they have been strung together in order to evoke a certain reaction and the manipulation is felt.

But the soul of the film is Mrunal Thakur. She makes your heart lurch for the naïve and petrified teenager who often appears to be burrowing deeper into an airless tunnel. When the two-hour viewing ends, one feels the need to take a deep, deep breath.

One hindrance that Love Sonia faces is that it fails to provide an in-depth insight to how this system operates in the real world outside its resemblance to seemingly endless other movies dealing with the same subject. You know which films we are talking about! Although relentlessly disturbing, the film is more conceited than it is satisfying. You need a certain kind of appetite for such films.

The film keeps you occupied in parts and draws you into the lives of the characters as if you were there as a reluctant observer. In the end, despite a certain emotional void created by average plot, Love Sonia is an honest attempt in portraying authentic horror of an issue clearly so close to filmmaker’s heart. It is a shame then this essential story was not further fleshed out to make it wholly persuasive.

And here’s the sign-off food-for-thought for Noorani. Isn’t it is painful to see foreigners frequently photographing India as a land of beggars? Why put out a raw version of brothels in India and conveniently avoid the ones abroad by just making a passing comment that the girls in distant and faraway lands are not devoid of torture? Couldn’t refrain getting a feeling that Noorani is… hmmm… besotted with foreign shores. And yes, someone please fix up my meeting with Ritesh Shah who has written the Hindi dialogues, he has lots to answer. Coming back to the mission accomplished, err, incomplete end, Noorani would do us an obligation by not attempting a sequel. Are you there, Riya?

Inspired by real life events, Love Sonia is the story of a young girl’s journey to rescue her sister from the dangerous world of international sex trafficking.