OneWordReview… #LucknowCentral: Uninteresting. LucknowCentral has wonderful performances… However, the screenwriting appeals only in bits and spurts… Music doesn’t work either.

In Lucknow Central, a bunch of desperate prison inmates turn to music in the hope of securing their freedom. Surface-level similarities to Qaidi Band notwithstanding, this is a premise with some potential, and first-time director Ranjit Tiwari delivers an inoffensive film with some moving scenes. But the inert script never powers the film with enough fuel to fly. A better title for Lucknow Central might have been Boredom Central. At nearly 2 hours and 30 minutes, it’s far too long and far too dull to inspire any other response. I’m going with a generous two out of five.

But director Ranjit Tiwari isn’t content to just tell this story. He bungs in a prison break, a love angle and a villain who is so formulaic that he ceases to be effective – I honestly wonder who gets scared when they see Ronit Roy glaring, chewing paan and knocking back whiskey. The rest of Lucknow Central doesn’t have any surprises either. The predictably schmaltzy story takes forever to unfold. Lucknow Central is too laboured to be loved.

Ranjit Tiwari and Aseem Arora’s story is off the beaten track but it bears a lot of resemblance to the recently released (but failed) Qaidi Band.On the whole, Lucknow Central is good in parts only but quite boring otherwise. It will, therefore, not be able to do much at the turnstiles. Flop.

But more than anything else, it is the mawkish sentimentality which overcomes the story-telling. When it is not that, then we find our fine conspirators being much too dramatic.When will Bollywood learn the value of letting silence create drama? You don’t need to drown everything with background music: that is certainly not jailhouse rock.

Lucknow Central is frequently stupid. The prisoners wanting to break out, to give you just one example, stash fake police uniforms in their drum set – even though their band doesn’t ever play or practice with drums. The climax is so long and unending that it feels like it’s taking place in slow motion, and because these scenes are set to a musical performance in the backdrop, the scenes put us in a fresh hell where the Selfie Le Le song never bloody ends. Damn this jailhouse schlock.

The film doesn’t make any significant statements on the legal system or rehabilitation beyond tedious displays of violence or stray moments, like when the out-on-parole convicts realise they are unwelcome, unfit for the world that has moved on without them.Of course the harmless temper and measured fervour of Lucknow Central’s key players insists they are not all bad.And for a while, you believe it too!

LUCKNOW CENTRAL just doesn’t work and the glaring similarities with QAIDI BAND are not to blame. The beginning portions are still fine. But the film defies logic soon enough and that continues right till end. On the whole, LUCKNOW CENTRAL is a poor show all the way. The weak script, lack of entertainment value and long run time of the film will work against it. As a result, it’s bound to struggle at the box office.

For all those who have not seen Qaidi Band, we are sure that you will take an instant liking for Lucknow Central for its innovative script and screenplay. The movie will work, but, only if the word of mouth publicity is extremely strong. Still, the film is recommended by us purely for its innovative script and stellar performances by the lead actors.

Based on true life events, Lucknow Central is a feel-good, human, prison-break drama that succeeds to manipulate you emotionally, despite being predictable and filmy in portions. While the peg is somewhat similar (barring the undertrial element) to the recent Qaidi Band, Lucknow Central has a distinct execution and is way more evolved.What essentially works for LC is its classic ‘winning against all odds’ theme. The inmates finding a reason to live and a sense of belonging within the four walls of the Lucknow Central jail instead of their homes is what tugs at your heartstrings.

Lucknow Central will make you laugh and cry, and will leave you with memories that last long after the film concludes. However, the film has its share of follies when the second half kicks off. The music could have been played a vital role in the film, but fails. A sloppy climax ends this sweet experience on a bitter note, turning out to be that unpalatable dessert that ruins a delectable experience. Yet, the plusses in Lucknow Central outnumber the weaknesses. It surely deserves a dekho.

Visually, Lucknow Central is sufficiently polished. The Film Cityish jail set is at best serviceable though. Predictably, shots of Lucknow vistas are intespersed for that smidgen of authenticity. As for the music score, it’s neither hummable nor recallable. The No. 1 flaw out here is the clumsily structured script replete with heavy duty dialogue on the lines of, “A frog who remains within four walls of a well can’t taste the air of freedom” and the zapper, “Even dreams are subject to taxation nowadays.”Unsolicited suggestion: Unless you want to feel like a Jail Bin Musical Machhli, avoid wading into these troubled waters.

Kishen Mohan Girhotra (Farhan Akhtar) is a young man who belongs to Moradabad, a city in Uttar Pradesh. One fateful day, Kishen gets accused of murder which lands him in Lucknow Central Jail where he’s awaiting his High Court trial for a death penalty. Meanwhile, a diligent NGO worker Gayatri Kashyap (Diana Penty), is compelled to form a Band of Prisoners for the band competition which is to be held in the dreaded jail of ‘Lucknow Central’ that year and this is how Kishen’s and her paths cross. Kishen befriends four other inmates, namely Dikkat Ansari, Victor Chattopahdyay, Purushottam Pandit, Parminder Trehan and convinces them to join the band. The dramatic narrative of Lucknow Central portrays how Kishen’s life progresses in jail and how music becomes an intricate part of not only his journey, but the rest of the band’s as well. 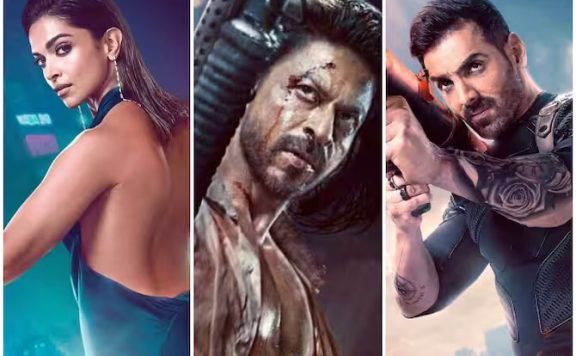