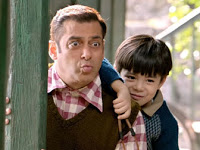 Tubelight  starring Salman  Khan saw its third day collections show an uptrend on Sunday but not by much.

Sunday looks to be best day so far

As per trade reports there is a drop in collections from Friday in Punjab , Haryana and Delhi circuits which anyway have lower impact of Eid.

On the other hand the Gujarat belt saw collections going up so the results of this movie seems far from clear.

Tubelight is 2nd  highest opening of 2017 after Baahubali 2 and slightly higher than Raees.

For a Salman Khan movie this is  7th Highest opening day of all time as the opening is below Prem Ratan Dhan Payo, Sultan, Ek Tha Tiger, Bajrangi Bhaijaan,Kick and slightly below Bodyguard and higher than Dabangg 2

Here are Top 20 Opening days of All time in Bollywood and Tubelight is ending up as no 16 on this list just ahead of Dilwale.

Tubelight had a good advance and at thursday close of business Tubelight has 9th highest advance of All time at sales of Rs 12.5 Crore business for the weekend