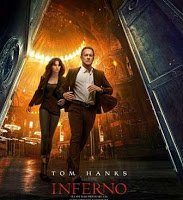 This is essentially pitched as the brainy version of a James Bond or Jason Bourne film, but to be fair, Inferno is more accessible and packs more thrills than The Da Vinci Code and Angels & Demons. A clutch of wrong choices, however, derails the film’s breathless pace.But the big problem with Inferno is that it never really creates a palpable sense of danger despite all the chases and gunshots. You know Langdon will crack the mystery in time, and you know everything will turn out just fine. But it never keeps you at the edge of your seat, worried that he’s cutting it too close. I’m going with two-and-a-half out of five for Inferno. It unfolds at a crisp two hours, and despite its shortcomings, there’s enough to enjoy. You might want to give it a chance.

Hanks has crossed the line with Inferno — Ron Howard’s adaptation of Dan Brown’s novel of the same name — and stepped firmly into Cage territory, by making a sad, schlocky mess of a movie with an inane plot, daft storytelling and bad hair. This is a simplistic, silly mess that tries desperately to appear intelligent by invoking the name of Dante Alighieri a dozen times — when all it really wants to do is be a National Treasure goof.It emerges as neither because Howard and Hanks treat the material as if it makes sense instead of embracing its B-movie heart, as a modern-day Cage movie would. This could have been a glorious so-bad-it’s-good entertainer, but thanks to its self-seriousness, Inferno emerges merely bland and undercooked.

The film adaptation of Dan Brown’s bestseller (Inferno) may not be an edge-of-the-seat thriller but it manages to hold your attention and involve you in its quest. Inferno, however is not a total smooth ride. It drags in portions, especially when it comes to Langdon’s personal life. Also it’s flooded with standard clichés that imply the professor being ‘humanity’s last hope’ etc. However, despite a few flaws, Ron Howard’s film is a competent adaptation and offers mild cerebral entertainment that manages to engage you. Go join the hunt.

Robert Langdon awakens in a hospital room in Florence, Italy, with no memory of what has transpired over the last few days. He suddenly finds himself, once again, the target of a major manhunt. With the help of Dr. Sienna Brooks and his knowledge of symbology, Langdon will try to regain his freedom and lost memories, all while solving the most intricate riddle he’s ever faced.