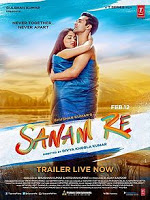 We wish the rest was as effective. What begins as a pursuit of happiness tale, soon loses grip and succumbs to cliche. The plot has loose ends with no backstories to justify the steps its characters take. Unless you consider Himachal as your Sanam, this heartbreaking tale on sacrifice and unrequited love, loses its plot and purpose somewhere along the way, re

On the whole, Sanam Re is a dull film with good music as its plus point. In fact, it is because of the very popular music that the film has opened reasonably well. But it does not have the strength to sustain in the cinema houses for too long and will not be able to do much at the box-office. Its medium budget on the one hand and recoveries from non-theatrical sources on the other will ensure that the producers make a profit.

Sanam Re, director Divya Khosla Kumar’s moronic second film, produced by T-Series boss and better half, Bhushan Kumar is packaged like a postcard romance high on sweeping ballads and snow laden vistas. What it really is a series of shabby, senseless music videos sounding off monotonous melody that believes in love at first sight between preteens because grandpa forecasted so and paints romance as wooden actors caught in an endless snowstorm.

Only the music, which is melodious and ear-wormy, and the locales, which are stunning, make patches of this movie bearable. The protagonists are too shallow and one-dimensional to be likeable, the dialogue is cringeworthy (the divorced Akanksha is compared to a used car) and the twists are too predictable for viewers to be emotionally invested in this film. This is a love story that should have lived and died as an idea.

This one has ingredients, but they’re not mixed in the right amount. Too much fascination with ‘glamour’ restricts it from becoming a cinematic version of Nicholas Sparks’ novels. To be fair with the team of Sanam Re, it’s not a bad watch. It’s not a great watch either. The film starts off on a promising note, but soon goes off the track. However, it could still be your Valentine’s movie. We know how desperately you need it!

On the whole SANAM RE boasts of great visuals and chart buster music which has been the hallmark of T Series. Even though the pace of the movie acts as deterrent at places, its target audience and the right release week (Valentine period) will see it through at the box office. Go get soaked in love. Now.

Sanam Re is purported to be a more mature romance. Nothing that transpires in the film comes anywhere near living up to that expectation.But it is all an utter waste in the end. Sanam Re is a surefire cure for insomnia. Its air of somnolence is so pervasive that a yawn a minute is absolutely guaranteed.The director gets one star for the nerve that helps her believe that this flimsy film has the depth to hold its load of pop philosophy about love and companionship without coming unstuck.The additional half a star is for cinematographer Sameer Arya. The frames that he composes are far too good for a film as awfully bad as this.

Probably the only thing decent about Sanam Re is its music and its cinematography across locations. One of the silliest scripts ever. The premise of Sanam Re itself is weak and filled with loopholes that even a kid can make out.This is a film that you would want to miss even on the Television let alone theaters.

If I came out of the screening and don’t remember a single thing about the plot, either I am suffering from Alzheimer’s or the plot sucks. But I would rather bet on the latter. The movie is a tackily made potpourri of clichéd scenes, boring melodrama, repetitive scenes (the 500 kadam scene is one hell of a sleeping tablet) and inexplicable character arcs, that’s gorgeous to look at but empty within. Watch this film only if your intention is to break up with your partner on the most romantic day of the year!

Sanam re is s story about the man who is confused with his love life finds solace in his birthplace with his childhood love.

Do look  at Sanam Re Box Office