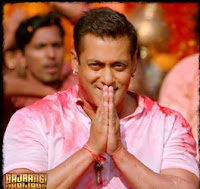 On Saturday Bajrangi Bhaijaan had 3rd highest single day collection of all time in bollywood history.

Saturday of Bajrangi Bhaaijan is higher than opening day numbers of Dhoom 3, Singham Returns and Ek Tiger but is lower than that of PK’s Sunday and Happy New Year’s opening day

This is also highest ever single day collections for a Salman Khan starrer.

This is highest Saturday of 2015 by a wide margin.

Bajrangi Bhaijaan also has a solid advance for Sunday which would be another big day.

This is the highest opening day of 2015 by a large distance as previous best was ABCD 2 with 14.48 Crore.

The First Day is  higher than PK’s opening day and is 6th Highest opening day of all time behind Happy New year, Dhoom3, Ek Tha Tiger,Chennai Express and Singham returns

Here are Top Opening days of all time.

The opening day for Bajrangi Bhaijaan  is second highest opening day ever for Salman Khan after Ek Tha Tiger.

Overseas:
Totals so far: 4.53 Crore with many countries still to report

First Day is lower because during ramzan before Eid most muslims don’t watch any movie this is called Pre Eid effect in Trade.

Bajrangi Bhaijaan will really start  having even bigger numbers from Saturday when Eid festivities start.

Producer has sold the worldwide distribution rights to eros for 100 crore so even pre release Producer is in profit.

For Eros after prints and promotion total cost is Rs 125 Crores which should be easily recoverable.

The Opening is at similar levels as Kick last year but compared to Kick which had chartbuster music  Bajrangi Bhaijaan music is not as successful which shows that opening is completely on Salman Khan’s star pull.

Kick collected 26 Crores on its opening day and with such an opening  day and Trade expectation is that Bajrangi should do between 26-30 Crores on its first day.

Opening of Bajrangi Bhaijaan is also better than PK so far though PK picked up later in the day.

Best opening areas have been in North with Delhi and Punjab taking the lead.

West Bengal and South India is on the lower side.

In South especially Bangalore and Hyderabad Baahubali’s success has meant lower number of screens for this Salman Khan starrer and this will cause at least a crore to be lost .

Salman Khan had a good success and star pull  in Andhra and Karnatka single screens and all these single screens are with baahubali so lack of these screens might pull Bajrangi Down a bit.