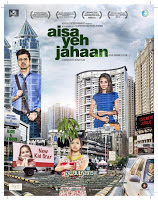 ‘Aisa Yeh Jahaan’, but you can’t help feeling uneasy when you see an entire feature film revolve around a child who is a `labourer’, so to speak, even though the film begins with a disclaimer, stating its position against ‘child labour’. Apart from Kholie, when you see Bishnu Khargaria ( a familiar face from Barua’s films) amongst the others who are patently not Assamese, you realise the difficulties of bringing such a subject into a full-length feature, and for an all-India audience. It is crying out to be done, sure, but better.

TKholie emotes through the toughest of scenes with admirable ease and has a strong screen presence for her age.Despite strong performances, Aisa Yeh Jahaan fails to engage due to its shaky storyline and scattered plot.It is a half-baked attempt to create something beautiful.

Both Palash and Ira play their characters to the tee, with utmost earnestness. The child artistes Prisha Dabas and Kymsleen Kholie play their parts wonderfully too. However, Bora’s plot is weakly brewed, often sloppily written and mostly lacks impact. The film will touch you surely, but the overall effect doesn’t suffice as anything much to write home about.

This film has been made with heart, but desperately tries to weave in the commercial elements when you have model Carol Gracias suddenly pop up in an item number. With two big guns (‘Bajrangi Bhaijaan’ and ‘Baahubali’) still firing at the box office and another Cannes-acclaimed film, ‘Masaan’, trying to make an impact, this week, this go-green call seems as tough as the zero garbage mission.

Synopsis: The film is set in Mumbai. It depicts the relationship between a husband and wife, the ever growing human detachment with nature and people’s attitude towards the physiology of a child’s growth which is portrayed in a lighthearted yet satirical fashion.