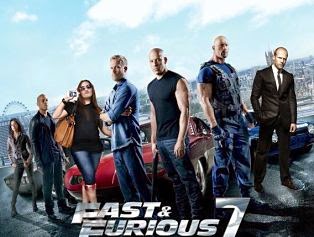 Trade Report: 91.75 Crores nett across all languages.
headed for a $20 Million around gross

It has slowed down after the good weekend.

Fast and Furious 7 is the highest grossing hollywood movie in India ever.

It has already beaten the lifetime business of Fast  and Furious 6 in India and is the first ever hollywood movie to cross  $10 Million in India in its first weekend.

Worldwide it has already grossed $384 Million including $143.62 Million in US making it 9th highest opening weekend of all time there

Across all versions hindi, english, tamil and telugu

or $5.3 Million gross which the previous version had grossed in  3 days.

Despite the drop Fast and furious is on track for a huge  weekend and is likely to be the first 100 Crore grosser for a Hollywood movie in India.

Fast and furious 7 looks likely to beat the collections of its previous versions very easily.

Fast and Furious 7 created a record at India Box Office:

Furious 7 is Highest Ever Opener for a Hollywood movie in India beating the record held by Amazing Spiderman 2.

Fast and Furious 7 is the biggest opener for any movie in 2015 in India higher than even Roy and Baby. however it had the benefit of releasing in all languages hindi,english,tamil,telugu

Internationally Fast and furious 7 opened to  a $16.9 Million gross (studio reported) on Wednesday from 12 countries