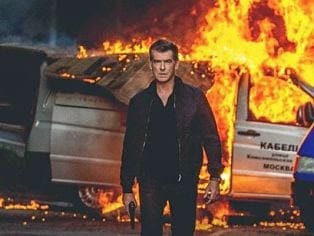 Donaldson has an impressive pedigree when it comes to this genre (*The Recruit* and *The Bank Job* to name a few) but he doesn’t inject much in terms of innovation in this by-the-numbers spy thriller. The sometimes-cluttered plot aside, this slickly-shot film manages to pass muster. A big reason why you might want to see this film is because Pierce Brosnan is in it. And indeed, it is on his able shoulders that this movie rests.

things can’t be that simple in a summer thriller competing with blockbusters with beefier action stars, can they? Suffice it to say the Russian and the ladies (including a fetching Kurylenko) are only a sub-, sub-, sub-plot in a large and loose plot to control the Kremlin. Make that larger and looser, for even that minor plot is only one of the one many strands The November Man is juggling to keep the story convoluted enough for everyone to go away impressed

It is a return to form of sorts for Brosnan. Not a great return but hey, he shows that he’s still got it. We have the usual fare and the usual twists (watch, you will get a little surprise). It is a movie where there isn’t too much to follow, but enough to keep you interested in the plot. With enough gunplay and combat for everyone, the film is good for a weekend watch.