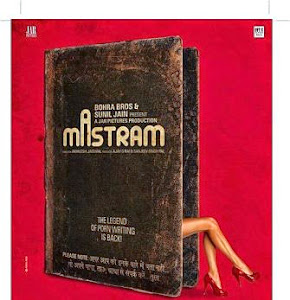 But instead of a layered film that explores Mastaram’s peculiar predicament, debutant director Akhilesh Jaiswal creates a curiously inert narrative. There are so many ideas here about writing, s**ual desire, fantasy, hypocrisy, the artist in the marketplace but they remain unexplored. Mastram is an opportunity lost. I’m going with two stars.

Jaiswal’s premise is different and daring; he bares the hypocrisies of a society that shames, silences and devours s** – all in the same breath (ahh!). Even the typography of the title symbolizes a male organ, but the film is far from pornographic. It’s about the psyche and dilemma of a writer torn apart between art and erotica. The problem is the storytelling that’s languid and uninventive for a subject so explorative. The story lacks stamina, and the background music drags the plot. The film that had a lot of potential, but what’s missing is the ‘woh wali baat’.

The 98-minute film moves at a languid pace for the first 30 minutes. Then Rajaram becomes Mastram and brings in the much-needed s**ual energy into the proceedings, which sadly is the only selling point of the film. Bagga, as both Rajaram and Mastram, is a mixed bag of emotions. In some scenes he succeeds in bringing about the nuances of a novelist who writes porn to earn money. In others, he looks lost and unconvincing. Director Jaiswal, who wrote Gangs of Wasseypur, seems unable to make up his mind as to how to firmly hold the narrative.The result then is a film that fails to make you feel good.

The film will disappoint those who go to see it in the hopes of catching a lot of ‘action’, for there are no explicit scenes in the films. However, many hilariously salacious dialogues and uncomfortable-yet-funny situations revolving around adolescent readers will provide enough masala. As it is an ‘imagined biography’ of the writer, we were left with the nagging thought that the writer of ‘Mastram’ had not made him as intriguing, mysterious and naughty as one might have hoped. As Mastram might himself have put it, “Kamukhta ke rass ki thodi kami reh gayi”.

It is a risky film that arouses and amazes with its unique and unusual story. With writer’s block prevailing as a persistent problem, here’s a story that isn’t even remotely heard of. Mastram is a film that must definitely not be missed. It is a indulgent tale which makes for quite an unconventional watch. Requiring its audiences to remain consistently emotionally invested in the film, the narrative is alluring and fiddles with the s**ual repression that is ingrained in the Indian psyche with the hypocrisy that plays an accomplice.

For Jaiswal, the very fact that he has peeked under the sheets and found a much-thumbed copy of a Mastram novel there is satisfying enough. No surprises into the nature of Indian s**ual desire disturb Rajaram’s orderly journey, and Bagga’s limp performance makes the character even less interesting. There are only moments of the frisson that characterises humankind’s fascination with the verboten, conveyed more through Mastram’s language than the visuals of open-mouthed women waiting to spill out of their clothes at the slightest provocation