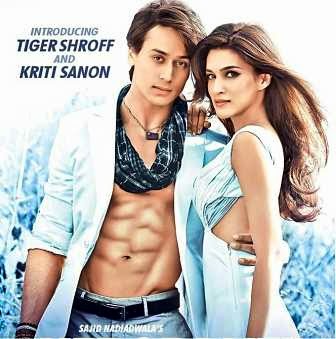 Heropanti is a remake of the Telugu hit Parugu, and is modeled as a throwback to those old-fashioned films of the 80s in which a tough-as-nails hero could vanquish a dozen enemies without breaking a sweat. There’s a damsel in distress, a selfish control-freak father, and a never-ending supply of menacing uncles who exist only to keep the hero and heroine apart. The film ticks all the usual boxes, but to be fair Khan occasionally puts an interesting spin on rusty formulas, delivering what is at best a frustratingly inconsistent film. I’m going with two out of five for Heropanti. We’ve been there, seen that

Tiger Shroff’s debut vehicle HEROPANTI is no exception. A remake of the Telugu Hit PARUGU HEROPANTI has been modified in its Hindi avatar [albeit slightly] to suit the North Indian sensibilities. It’s a vintage love story that gives its lead actor ample scope to depict heroism and waltz into your heart. On the whole, HEROPANTI is designed as a launch pad for Tiger Shroff and it gives him ample opportunity to prove his credentials in his debut film. The good news is, he delivers a striking performance. Additionally, what works is the masala quotient — melodrama, music and action. An entertainer that hits the right notes!

Heropanti is designed to do exactly one thing – make us like Tiger Shroff and that it does exceedingly well. The film is a showcase for Tiger’s talents – he is an incredible acrobat who does backflips in dance sequences and effortlessly leaps offs walls in action scenes. The rest of this film however, is unintentionally comical.But above the train-wreck, Tiger stands tall. He earns Heropanti two stars. I can’t wait to see what he does next. ‘

the story carries some corny 1990s flab, including a song-in- the-snow where the lovers wear colour co-ordinated clothing and Tiger sports a truly awful pair of blue goggles. More snags detract from otherwise tight direction. Still, Heropanti is enjoyable. The climax pumps up the action, featuring shirtless Tiger, crouching Rajjo. The tale has a twist as graceful as Tiger’s flips and you do agree when Tiger suggests, ‘Mere naal tu whistle baja.’

Sabbir Khan does a fine job as director. He has mixed action and romance effectively and added a dash of emotions, too, to make the drama appealing to all age-groups and all sections of audience. Music is very good, and will grow even more now, after the film’s release. On the whole, Heropanti is a surefire hit.

Unfortunately, director Sabbir Khan’s out-dated filmmaking has no room for nostalgic wonderment even if that’s just what it means to cash on. Heropanti’s sole purpose is to let us know there’s a new actor on the entertainment scene. Nothing about Heropanti is fresh or clever. Saddled with a pedestrian setup, ghastly writing, old-fashioned treatment, tacky styling and uninspiring co-stars, Tiger has little going in his favour.

Over all, Heropanti is an amusing yet bland modification of the classic Dilwale Dulhaniya Le Jayengey, featuring some of the most fake Haryanvi accents this North Indian has ever heard. The film could do with more action and less drama. The most masala-less masala movie I’ve watched in a while, it will have you echoing the second most (over)used dialogue in the film, “Kab jayegi teri heropanti?” ​

Heropanti is a full-on ‘paisa vasool’ Sajid Nadiadwala entertainer. It doesn’t quite measure up to the requirements of the theme of honour killing that it so valiantly puts forward. But as a masala entertainer, that has more to say than one would expect from a film of this nature, Heropanti gets its fundas right.

Sadly the film doesn’t do justice to both the newcomers. Nothing unique about the screenplay. Ordinary direction. It’s a long time since this kind of lover story has been seen on the screen. Just when you thought that the formula had been forgotten Heropanti tries to revives it. Tiger shows huge potential in action and dance but director fails to exploit it fully. What was the costume designer thinking while dressing the leading lady?

Heropanti doesn’t quite offer you a valid reason to watch it. The acting department is terrible. If you are expecting great action moves, you’ll be left disappointed as the trailer had shown them all.  I agree, Kriti Sanon tried to light up the screen with her ravishing presence but with the story that doomed, there’s barely anything left to save. By the time the film’s last credits rolled down, I realized the movie was just my ‘Bura Waqt’ – Jo sabka aata nahin and hamara jaata nahin! ​

It’s such a terrible mess. What was Sabbir Khan trying to do.. juggling Bollywood musical with martial arts action, comedy and forced melodrama and failing in all. How successfully he makes caricatures of characters make serious situations turn hilarious. Unintentionally funny.The script doesn,t allows any emotion to take place between Tiger and Kirti. The chemistry never develops and the audience feels nothing for them.In comparison ‘Paragu’ was emotionally charged with emotions and action making it a winner among the masses. ‘Heropanti’ falls flat.

The best thing that could be said about Heropanti is that it is not as terrible as Salman Khan and Akshay Kumar films. The second best thing about it is that Tiger Shroff may be effeminate, but he’s a likable guy who can do some truly amazing stunts. This is where the positive aspects of Heropanti end, because everything else in the movie is a raging river of stupidity.

‘Heropanti’ is a quintessential Bollywood romance, where lovers have to fight the society, angry uncles and dominating fathers, who give love a bad name, to win over their ladylove.While director Sabbir Khan pays tribute to Main Pyaar Kiya by playing a scene in ‘Heropanti’, his own take on romance is a tad insipid, archaic in its thinking and unchanged in treatment and characterisation. While Salman Khan’s innocent love affair might’ve worked in the 80s, in 2014 we need a little more than six-abs and a slim waist to do the trick.