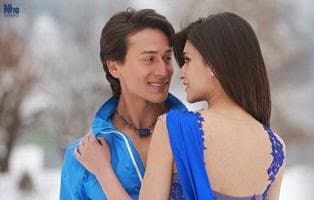 Budget: 26 Crore including cost of promotion

Earlier:
Heropanti had a solid Monday & tuesday with a fall which is less than 40% from Friday which is a trend of good word of mouth movie.  Heropanti is  now set to be a Hit.

Here are the comparison of weekends by a newcomer movies in recent times
Student of the Year: 25.6 Crore
Ishaqzaade:  15.5 Crore
Heropanti: 20.73 Crore

Heropanti has done very well at single screens but not so good at multiplexes.

Heropanti had two songs which were part of Top 10 Hindi Songs  chart in the lead up to movies release which helped it open well in mass centers.

Tiger Shroff has achieved one of the highest opening day collection by a newcomer.

Here are the highest day 1 by a newcomer movies in recent times
Student of the Year: 7.5 Crore
Ishaqzaade:  4.5 Crore
Heropanti: 6.4 Crore