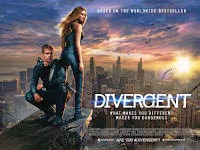 Blessed with a natural presence and lots of charisma, Woodley makes for a worthy leading lady, while Theo James broods and smolders in all the right ways as her trainer and love interest. But the film’s bland execution and its muddled message make it hard for you to connect with it. I’m going with two out of five for “Divergent”. There’s a nice set piece, one in which Tris zip lines across the entire city. It’s the best bit in this over-long film.

The caste system takes on a new avatar in a post-apocalyptic future, where humans are segregated by choice into five factions. Those who cannot be categorized are called ‘Divergent’. One such individual, Tris Prior (Woodley), finds out that the faction leader wants to exterminate all Divergents. At face value, Divergent comes across as a film that doesn’t push any boundaries whatsoever. But at the heart of this dystopian tale awash in grays and browns is a lesson about finding one’s identity and being at peace with oneself.

If The Hunger Games had never happened, then perhaps Divergent would have been a more compelling experience. But this film treads on much of the same ground – dystopian future, gutsy, teenage warrior heroine, dueling factions, an ominous, omnipresent Big Brother style government. Divergent ticks off all the boxes but with far less panache. Yes, the sequel Insurgent is on the way. If you are a fan of the books, you might enjoy this but for this rest of us, it’s a slog. I’m going with two stars.

The plot is engaging but it leads you on to an end that falls flat on its face. For a film that assumes that all teens magically have superhuman strength and agility, the action is weak, with the gunfights being almost absurd. Done with a fair amount of detail, Divergent just seems like Avatar: The Last Air Bender, The Hunger Games, Vampire Academy and The Host put together. Only meant for fans of the trilogy, Divergent lacks the slightest trace of intensity.

The movie is just entertaining, which isn’t necessarily a bad thing. Fans of sci-fi and dystopian films, might like it, but for the general population, this film is quite an average one. The concept and mythology of the film is certainly interesting, but the pacing of the film and lack of proper action sequences (that one would expect from a film like this) distracts you from the plot. With a sequel in the works, the franchise still could pick up the pace and surprise viewers in its second go around. The film is entertaining and does have its moments, but it isn’t engaging enough and in the end it’s still highly forgettable.