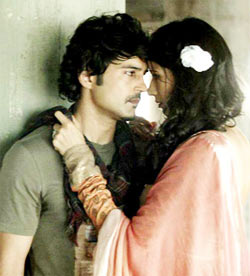 Ishq Actually is not for those who know what they want from life. It’s for the overtly romantic types, who watch films, read poetry and hope to walk in the clouds. Bottom-line? It’s not the story but the way its presented, that makes this film the kind you will want to watch on a lazy afternoon. Like most arty foreign films, there’s a lot of nothingness going on in it so stay away if you find this boring. However, if you are as indecisive as the protagonist, it will keep you glued. Rajeev Khandelwal makes his presence felt, while the rest are mediocre. Ishq Actually is not actually about ishq but our notions of it so don’t expect a great love story.

Ishk Actually is just about the most bizarre romantic film to come out of the Hindi film industry in the last few years. Despite working with conventional elements, the makers attempt to stride into art-house territory with its treatment. If only Khanna had not taken a populist script and tried to put his non-commercial spin on it, Ishk Actually might’ve still been saved. Now he should try taking out the songs, the score, the poetry-ridden dialogue, and re-edit it down to 75 minutes complicating the logic further and start sending it to film festivals for instant success.

Story, screenplay and dialogue writer Arindam Mukherjee falters miserably. Till the end of the film you’re unable to figure out what the film is all about. There’s little semblance of a screenplay. As for dialogues, sample this: ‘Haath, main tumhaara pakdoon, aur uspe ungliyon ke nishaan Neil ke hon’. Mercifully, due to the abundance of killer pauses, the dialogues are few and far in between. ISHK ACTUALLY could easily have been called ISHK CONFUSED or maybe ISHK, REALLY? You don’t want to sit through an ordeal of a love story. Avoid!

Anish Khanna’s utterly warped, affected direction isn’t going for the rom-com treatment. He chooses to render every scene with needless mystery and a stilted ambiance of lifeless, postured passion aiming for credibility by playing against a rip-off of Yumeji’s theme (In the Mood for Love) resulting in unintended comedy every few minutes. Mostly though it’s the sheer senselessness of writer Arindam Mukherjee’s absurd script that boggles the mind. One minute, the heroine’s all over Guy A. In another, she’s undressing for Guy B. And then, no kidding, she changes her mind yet again. Obtuse, dispassionate and inert, Ishk Actually is one of the drabbest films I’ve seen all year.