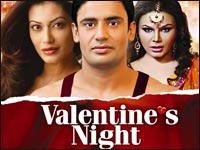 Written and co-directed by former Tehelka journalist Kumar Baadal, the movie is an exploration of five young, wannabe cools – all nursing a farm-fresh broken heart – in times of social networking. But soon the movie becomes like its protagonists who look all dressed up and have nowhere really to go. There’s plenty of chatter. And the only guys who find the conversation funny are the characters themselves who often burst into hysterical laughter. Midway, the movie changes tracks. New characters crop up along with fresh sub-plots. The gang of five is sucked into Jat politics, a prostitution racket and drugs. Finally, the movie devolves into a shoddy murder mystery. But there’s little that grabs attention.Valentine’s Night ends up like one of those car drivers in the movie who doesn’t know where to go and keeps circling the streets of Delhi.

There are films where you feel that the storytellers were just interested in wasting money. Unfortunately, the director duo of Kirshan-Baadal of ‘Valentine’s Night’ fall into the same category.The film is probably India’s second Facebook movie after ‘Mujhse Fraaandship Karoge’ but it has a different angle this time. It features Facebook as a common platform where people with broken hearts come together to celebrate the Valentine night.The film basically has one idea and that is to make a film with Facebook in the centre, and you won’t be able to find another idea in the film.Avoid ‘Valentine’s Night’ otherwise or no, wait, take your partner to watch it and I guarantee your break up.

What’s Good: Hardly anything.What’s Bad: The ordinary script; the poor performances.Verdict: Valentine’s Night is a nightmare for the audiences. Flop!Watch or Not?: Watch it at your own risk.

The film is flawed right from the planning stage. There are plots within a plot and the directors do not know how to handle the back stories. Everything is just thrown in, like an inexperienced cook would do to a dish hoping it would taste good.I must say that this is a brave attempt but the makers could have done well to rope in a few experts to whet the script before taking the final plunge. After all, you are taking the product to the masses and a little sensibility is what is required.