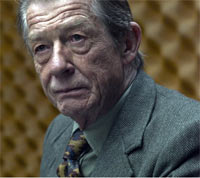 It’s the Cold War espionage. And it’s based on John Le Carre’s 1974 novel. That’s not all. Here are some more reasons to watch this one: First, it’s a gripping, high profile hunt of a double agent working for the Soviets — now very much a part of MI6. Second, decoding the intelligence leak and brilliantly short listing the suspects to five men close to him is John Hurt as Control. The end result? You actually lose interest in the hunt-for-the-spy game. But again making up for all that is a varied range of performances to choose from.

The film starts off foggy and dense, a shadowy, unclear affair drawing itself out lazily — even as the script conversely takes liberties with the novel as it naturally condenses massive chunks of it — but as the final act comes into view, all is in unerring focus and the narrative spools out loyally, tensely, dramatically. It is a cinematic masterpiece, held in place by a supremely assured performance by Oldman, but is likely to confuse those unfamiliar with LeCarre’s work the first (or even the second) time they see it. But pay attention and you’ll learn just how rewarding cinema can be. Like the massive stickers in the film’s elevator keep reminding us, mind your head.