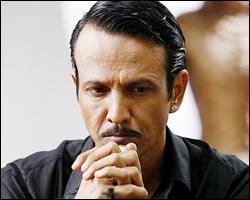 Let me add, however, that BHINDI BAAZAAR INC. isn’t for the faint-hearted or lily-livered. In this story, the human life is cheaper than perhaps a bottle of beer, the spoken language is acidic and at the same time loaded with expletives and the games gangsters and their women play is scandalous and contemptible. You need a strong stomach to absorb this one!On the whole, BHINDI BAAZAAR INC. doesn’t offer anything novel in this beaten-to-death genre. But it makes for a compelling watch due to several nail-biting moments.

Bhindi Bazaar Inc tries to capture a slice of life of sleazy Mumbai as it paints the picture of two rival gangs, headed by Pawan Malhotra and Piyush Mishra.The film takes too long to get on course and is cluttered with loose, untidy bits that need to be edited out. What works in favour is the authenticity of the setting and the changing tide of events.

When it comes to the plot, though, Bhindi Bazaar meanders aimlessly in so many directions, and is fraught with so many undeveloped subplots, that at the end of it, one feels like offering the filmmaker a free-of-cost crash course in the craft of making crime thrillers. Ultimately, no part of the script ever matures into a full-fledged hook. There are moments when things seem to be looking up and it appears as if Bhindi Baazaar has finally found its footing. But it never does. All that is left eventually is a residue of aimless, incomplete bits.

You’ll find a lot of filmmakers falsely claiming that their film is ‘different’, but the tag certainly holds true for BHINDI BAAZAAR INC.. It might be director Ankush Bhatt’s debut film, but he certainly knows how to do his job. The style of narration using chess is unique and makes for a compelling watch. The number of twists and turns keep you hooked. However, you do end up being a tad exhausted towards the end. And the second half does wander for a bit. A riveting thriller backed by superlative performances make this BHINDI BAAZAAR certainly worth ‘shopping’.

What’s Good: The performances of some of the actors.What’s Bad: The lack of novelty in the script and the narration; the predictability of the drama.Verdict: Bhindi Baazaar Inc. lacks novelty and entertainment. Flop.Except for a couple of twists in the tale, there is hardly anything which one has not seen in an earlier film. Also, the drama is quite predicatble.On the whole, Bhindi Baazaar Inc. is a dull fare with some chances in pockets of Bombay only but bleak chances in the rest of India because it lacks novelty, face value and entertainment value.

Bhindi Bazaar Inc is one such product whose packaging is attractive, but the real stuff turns out to be damp squib. In the quest to make it an edge-of-the-seat thriller, debutant director Ankush Bhatt fails to present a coherent story in the first half. The second half meanders with only a few suspense elements breathing life into the screenplay at the fag end.It’s certainly no ‘risk’ to miss out on the momentary thrills that Bhindi Bazaar offers. If you’re not a hopeless Mumbai freak in search of these, stay at home, sip a cup of chai and enjoy the rains.