Home » bollywood hungama » Short Kut The Con is On Review 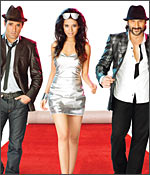 List of Short Kut The Con is On Movie Reviews

Was this supposed to be a comedy? If so, why doesn’t the film make you laugh even once? Why do the jokes fall flat? Why are the witty one-liners ekdum pathetic? And why does Arshad Warsi have to pitch in one of his most nerve-wracking performances as the minus-all-morals low life who is infuriatingly blase about stealing scripts and walking over people? And if it isn’t a comedy, it surely couldn’t be a serious take on dosti-dushmani and diabolical friends. Simply because this friendship-turned-sour story doesn’t touch you even once. Then kya? Khaali-peeli time-pass? Nah! Because time doesn’t pass; it literally drags while watching this undefined venture.

Unable to find its groove in either comedy or drama, this film lumbers along unsteadily with a screenplay that lacks direction. And saddled with such uninspiring material, neither of the actors can muster up anything that even remotely resembles a performance.Shortkut isn’t the kind of film that makes you angry. It just leaves you very bored. I’m going with one out of five for director Neeraj Vora’s Shortkut, it’s a long, tiresome journey to nowhere.

The basic story of SHORT KUT had the potential to keep your attention arrested. It even starts off well, but runs out of breath soon after. In fact, the graph of the film only goes down as reel after reel unfolds. Actually, it should’ve hit the screens a couple of years ago. That’s because it abounds and relies completely on clichés and which, in turn, makes you break into a big yawn. In short, SHORT KUT is meant to be a comedy, but is actually a tragedy for the viewers. On the whole, SHORT KUT – THE CON IS ON is a poor show all the way. A major disappointment.

At a time when ‘comedies’ seem to have become nothing but a mindless procession of gags, it’s good to see writer Anees Bazmee come up with an actual plot. The points of conflict in Short Kut are authentic, and — thanks to Akshaye Khanna’s stoically solid performance — you do end up feeling for the leading man as he undergoes severe trials and tribulations.Short Kut had the potential to be a genuinely funny one, and while it mostly flubs that promise up throughout, it does manage a few moments. It could really do with a pretty significant re-edit, though

Shortkut unfortunately presents a far from convincing picture of the movie business. Most of the characters and situations end up looking over-the-top and caricaturish. Were this movie a brainless spoof, it might still have worked. Sadly Shortkut pretends to be a straight-out-of-life situational comedy.Khanna and Warsi try hard to pump some life into the lifeless screenplay. But a weak script and dull direction mar the potential of an interesting plot.