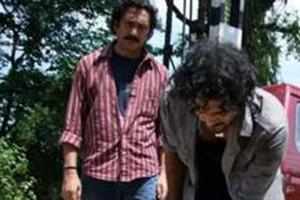 BAABARR isn’t just bloodshed, but at the same time, isn’t for the faint-hearted either. There’s violence galore, in fact several sequences are brutal, and chances are a section of the movie-going audience [read families/ladies] might shy away from this experience.Yet, what makes BAABARR a must-watch experience is its story, the strong script [Ikram Akhtar] and the deftness with which director Ashuu Trikha has narrated the story. Without a shred of doubt, BAABARR is one of the most powerful films to come out of Bollywood in 2009.

While the action is raw and to some extent even enjoyable, what annoys most about Baabarr is the fact that it actually glorifies crime and its protagonist’s actions. There’s even a song being sung in his praise where our man goes about on a killing spree.The plot, I must confess, does have its strong points – especially towards the end. However the poor direction and the loud background music tends to ruin it all for you.Baabarr is such a poor attempt at filmmaking you don’t want to waste your money on it.

With exceptions like the vastly under-feted Sehar (2005), not many films have journeyed into the bowels of the murky crime world of Uttar Pradesh. But right from the paan-stained walls, the charpois, the milky tea, the abattoirs with those scary butcher’s knives, the claustrophic bylanes, cheek-by-jowl rooftops with flying kites — Amanganj is rich in details. We get the feeling of watching something raw and real. On occasions, the movie becomes a series of repetitive violent scenes even though the chase sequences, especially where Baabarr chases his rival Tabrez (an impressive Sushant Singh), are neatly executed. And, one wonders, whether the final twists in the tale are only for shock value, or they flow out of the narrative.