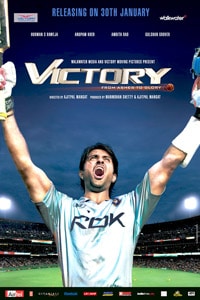 LAGAAN and IQBAL are landmark films on cricket.VICTORY traverses a different route altogether.The difference lies in the fact that the sportsmen in the film aren’t actors, pretending to be cricketers, but real-life cricketers. And that makes the goings-on identifiable.On the whole, VICTORY is a strictly average fare. Barring a few moments in the second hour, there’s not much that you carry home.

It is in the end, an entirely pointless film, an exercise in futility. I’ll go with one out of five and a thumbs-down for director Ajitpal Mangat’s Victory, a film that reduces real heroes like Harbhajan Singh and Brett Lee to junior artistes in the background. ((pause)) Watch it only if you have a high threshold for pain.

Hurrah! Hurman comes of age! He not only shakes off the Hrithik-lookalike tag, he also manages to grab your attention and ensure that you don’t get bored in this three hour mirch-masala fare of cricket, cricket and some more cricketGo for some cricket dhamaka and for Hurman’s second coming which seems to make Love Story 2050 seem like a nightmare.

The friendly and inexpert appearances by cricketers don’t redeem this stadium fiesta at all; only Harbhajan Singh utters a forbidden word which is bleeped out. Hurman S Baweja is as earnest as a boy scout. For the rest of the way, here’s Defeat.

The blame lies mainly with the director. Mangat is neither a raconteur nor a master craftsman. And it is his inexperience, and the subsequent inability to tell a story differently that turned the film to an unintentional comedy. And the gimmick falls flat too.

This film looks like an cut-paste of cricket gossip from prime time news bulletins. It seems someone out there wanted to tap into the hype and the sensationalism around the most popular sport in the country. There is little in this film to prove the filmmakers’ love for the game. If anything, the filmmakers seem to be awestruck by the stardom, the hysteria and the fanaticism around cricket. And that’s all they want to capture.Victory is a sad attempt at making a film on the most popular National pastime. You’d be better off playing book cricket at home instead.

The film is a complete let down in many departments and instead of wasting time on this film it is a better option to watch a re-run of any Indian cricket team match on TV or best spend your time watching the current India v/s Sri Lanka one day series.