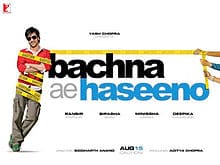 Bachna Ae Haseeno is well shot, competently performed and the writing shows glimpses of honest-to-goodness subtext and intelligent character development. It’s also a film centering around a lead actor, showing off just how much of ‘it’ he has — and he has more than a fair amount. If only the second half wasn’t as predictable as it is, the film was an hour shorter and every one-liner wasn’t accompanied by a burst of background score acting like a laugh track, we could have had a really good film. As it stands now, it’s watchable timepass fare.A decent date film, but one won’t blame you guys for walking off at intermission.

On the whole, BACHNA AE HASEENO has an interesting first half, but a weak second hour spoils the show. At the box-office, thanks to the hype built around the film, the opening weekend should be great, but beyond that, has tough chances of sustaining. Multiplexes at some big centres would be better, but that’s no consolation

THE promise that Ranbir Kapoor displayed inSaawariya , his debut venture, has been duly fulfilled in this breezy, urbane tale of love and longing, set against a come-of-age backdrop of 21st century twenty-something Indians. Here is a crackling bunch of gals and guys who mirror the mores and manners of modern India, even as they re-live the traditional Bollywood fable of ishq-vishq, pyar-mohabbat .