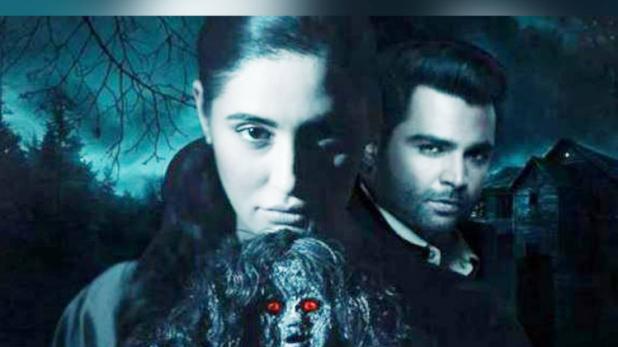 Sachin Joshi and Nargis Fakhri compete with each other to give the most wooden expressions. Sachin wins the contest by his lethargic body gestures. Every year Sachin comes up with one film as an actor and happily provides income to the technicians associated with his movies. Amavas is a boring, illogical, film. A snooze fest

Director Bhushan Patel, previously credited for 1920: Evil Returns, Ragini MMS 2 and Alone, is no stranger to the genre. He packs in every trope that could possibly evoke a jolt-and-a-half. But each and every scene — from approaching a door with dread to bending over to reveal a dark apparition standing right behind, has been borrowed from some film or the other. That the makeup and prosthetics here seem dated and sourced from a Halloween party store also dilutes the overall effect. Still desperate for a fright? Go check the price for a tub of caramel popcorn at a multiplex near you.

The special effects aren’t shabby, but they are tedious. Watching a ghost turn into a flesh-eating, blood-thirsty beast with crazy eyes gets boring after it’s repeated more than once. At one point, Fakhri’s character Ahana frustratingly claims she doesn’t understand what’s going on in that castle anymore. Well, she’s not alone.

Never seen a lady (Anonymous ‘coz I don’t know her name) before who tells her grandson (Sachiin J Joshi) to visit a purani haveli that ruined 8 years of his life. Never seen a girl (Nargis Fakhri) who gets attracted by a broken swing in a picture of that haunted mansion and makes her boyfriend (SJJ) cancel their tickets to Paris. Never seen a boyfriend (SJJ) who touches his ladylove (NF) as if she is suffering from a contagious disease.

The most frightening thing about Amavas is not the ghostly apparition floating around the darkened corridors of an eerie English manor house. It is that this couple that knows nothing about each other’s past and talks about nothing real, thinks they have a shot at a future as a married couple. An incredibly ungainly lead pairing, Fakhri and Joshi have more chemistry with the tattered talking doll than they have with each other.As for the significance of the title, spirits get stronger during an eclipse, we are told. Watch this total eclipse of the art at your own peril.

Far away from the bustle of the city, a young couple is looking forward to their stay in a once-abandoned palatial mansion. But their lives are about to turn into a nightmare, as dark forces lie in wait beneath the shadows of the haunted bungalow.