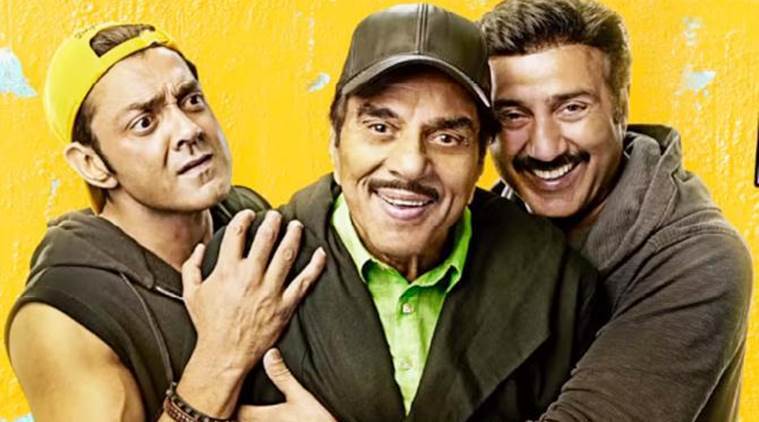 Dharam ji still has dollops of charm but even he or Sunny Deol’s iconic dhai kilo ka haath can’t lift this incoherent film. Yamla Pagla Deewana Phir Se tries to be a comedy, an Ayurveda commercial, a plea for national integration – specifically between Gujaratis and Punjabis – a love story and a moral science lesson.The humor is painfully low grade.

Navaniat Singh’s direction is dull. For one, he is let down by a weak script. Secondly, his narration is hardly of the kind which keeps the audience engaged or engrossed. On the whole, Yamla Pagla Deewana Phir Se… is a dull fare in which the comedy hardly entertains. It will, therefore, fail to make any mark at the box-office.

You do not need to subject yourself to its surfeit of action, comedy and melodrama unless you are an inveterate fan of the Deols, collectively or individually. What Yamla Pagla Deewana Phir Se offers purely as a cinematic outing isn’t worth your time.

In this installment, taglined ‘Phir Se’, even the half-hearted guffaws, which we managed in the first two, have dried up. The jokes are so lame that they are practically invisible. A priceless Ayurveda formula is up for grabs, and the cast mills about, one half trying to grab it, the other trying to retrieve it. And everyone on screen time passes their time while wasting ours.How you wish the film was too.

‘Yamla Pagla Deewana Phir Se’ carries the popular franchise forward with a brand new story and characters that once again highlight the Deol brand of entertainment. Overall, ‘YPD 3’ sure bears the hallmarks of a loud comedy, but loses much of its steam in the second half and culminates into a predictable climax. If you’re a diehard Deol fan, we’re sure you’ll find a reason to watch this film.

YAMLA PAGLA DEEWANA PHIR SE does arrest attention in the beginning when sutradhar Annu Kapoor gives an introduction about Ayurveda medicines and its importance followed by Puran’s introduction. However, things go downhill once Kala is introduced. This is supposed to be a comic caper but throughout the film, there are hardly any scenes that would induce even a mild guffaw. On the whole, YAMLA PAGLA DEEWANA PHIR SE is marketed as a comic caper but there are hardly any scenes that would make one laugh. Disappointing.

This is the third instalment of the ‘Yamla Pagla Deewana’ series and the first part still remains the best in the lot. The third part completely differs in characters and plot but carries forward the enthusiasm and excitement of the Deols. If you are a fan of the Deols, then this is unmissable. All in all a good entertainer, which got stretched a tad too much.

Overall, Yamla Pagla Deewana Phir Se tests your patience. It’s a two and a half hour bore. As much as I love Deols and especially the legendary Dharmendra, it breaks my heart to see them do their best in a film like this. I was extremely happy to see Deols return on the big screen but sadly, the entertainment did not

Inheriting from the ancestors, the legacy of the Ayurveda panacea ‘Vajrakavach’, a famed and effective remedy for all ills, the brother duo Pooran and Kaala use the kavach with varied intentions. While Pooran who is good-hearted puts in use his heritage to help people, Kaala looks out for his interest in money. Parmar, an erstwhile Casanova and a colorful character who is also a sharp and intelligent lawyer of repute, is the paying guest in the brothers’ house. He is a thorn in Kaala’s side, as he is paying the same rent for 35 years, that is of 125 rupees. Adding to the Punjabi mix, Chikoo is a pretty Gujarati girl, who steals Kaala’s heart and brings a sinister twist to the tale.