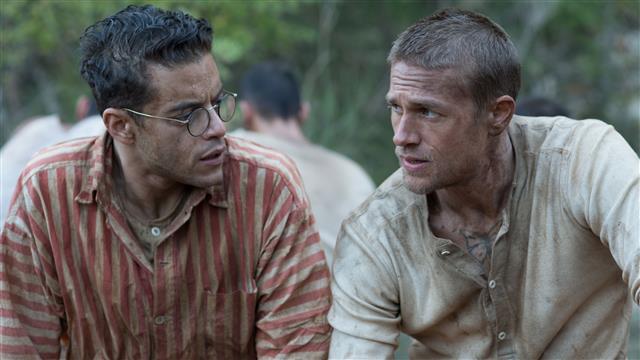 The resilience of the human spirit makes for a story as compelling as they come, especially when inspired by real-life events. This film is the remake of an original feature released in 1973, based on Henri ‘Papillon’ Charriere’s autobiography. As the story goes, Papillon, played by Charlie Hunnam this time around, is a thief sentenced to life imprisonment after being framed for murder. On his way to jail, Papillon befriends fellow inmate Louis Dega (Rami Malek), a rich man convicted of fraud. Papi, as he’s fondly called, promises to protect the weaker Dega in exchange for funds to secure their escape out of their secluded facility. Their plans are thwarted continuously by guards and a warden who merely seeks to break down his inmates rather than rehabilitate them. This game of wits sets the tone for the film; what follows is a harrowing mix of triumphs and setbacks for Papi as he plots his escape amidst escalating challenges.

This new retelling directed by Danish filmmaker Michael Noer is faithful to the narrative arc, but where the book and first movie were suspenseful and engaging, this is unrelentingly gruesome. Their several escape attempts, including one on a small boat tossed around in a storm, are as harrowing as life in prison. But they keep going. With its savage beatings, stabbings and an overly bloody beheading, the film offers far more violence than suspense.Unrelentingly grim throughout its 130-minute runtime, Papillon is an exhausting experience.

The prison violence is harsh and brutal and the guards are painted with a Nazi tint. Cinematographer Hagen Bogdanski has outdone himself in the sea sequences. Summing uo, director Noer tries to strike a balance between violence and spirtuality and while you do feel the pathos, it doesn’t quite give you the intended catharsis. It’s still a cracking adventure yarn and those who haven’t seen the 1973 original should definitely go for it…

The epic story of Henri “Papillon” Charrière, a safecracker from the Parisian underworld who is framed for murder and condemned to life in the notorious penal colony on Devil’s Island. Determined to regain his freedom, Papillon forms an unlikely alliance with convicted counterfeiter Louis Dega, who in exchange for protection, agrees to finance Papillon’s escape.