Lakhia’s biopic of the ‘Godmother of Nagpada’, the younger sister of underworld don Dawood Ibrahim, is a shallow, lazy affair. Haseena’s transformation from the meek, uneducated daughter of an honest police constable to the powerful, intimidating figure believed to have run Dawood’s illegal operations in India is half-baked and strictly surface level. The script feels like a Wikipedia entry of sorts, a checklist of key events and incidents that supposedly shaped her life.

In the hands of director Apoorva Lakhia, writer Suresh Nair and actor Shraddha Kapoor, this material becomes the stuff of unintentional comedy. I applaud Shraddha for making a brave and unconventional choice but her performance is so inept that it’s hard to take any of this seriously. She is aping Marlon Brando from The Godfather – never a smart decision for any actor. Of course Shraddha is absolutely hobbled by the writing. Her character is as inconsistent as the bronzer on her face.

In short, part of the blame for the film not moving the audience goes to Suresh Nair’s writing but more than that, the blame lies on the writer and the director for their choice of subject. On the whole, Haseena Parkar is a film with very limited commercial value as it doesn’t touch the heart. At the box-office, it will turn out to be a flop fare.

Haseena Parkar is a dreary courtroom drama in which the protagonist is hauled before the law to defend herself against grave criminal charges. The story moves back and forth from the sessions court magistrate’s hearing to piece together the life of the only lady don the Mumbai underworld has ever seen. The film is hard-pressed to assert that she might have been as much a perpetrator – she thought nothing of bandying about her fearsome brother’s name to intimidate people – as a victim who paid the price for her family’s deserved infamy.

The film shows how Haseena pays the price of being Dawood’s sister as if she was clean otherwise. Then there are efforts to present Shraddha as a menacing mob-boss. There she appears a misfit. The tone of the film is another problem. The director keeps switching between a stylish film and a period film. Not that they can’t exist together, but he changes gears so frequently that Haseena Parkar begins to look jumbled.

The story written by Suresh Nair packs in too much for a 124 minute long film. Suresh Nair’s screenplay does not come across as effective. HASEENA PARKAR begins on a nice note and one expects the film to go on a high. Sadly that doesn’t happen. One of the biggest problems with the film is that it gives an overview of the underworld menace and doesn’t explain the scenario to the audiences well. On the whole, HASEENA PARKAR fails to impress as it’s too superficial and unexciting. At the box office, the limited buzz and competition from other releases will prove detrimental.

The biggest problem is the story. Haseena Parkar is not a docu drama like Daddy nor is it a commercial gangster entertainer like Once Upon A Time In Mumbai. And it does not fare well as a biopic either.Juvenile story-telling, melodrama and an shaky lead actor does not take Haseena Parkar to the level, it was expected to. And what is the point of revisiting a female don’s life if the story fails to thrill. Sorry Shraddha, Arjun’s Daddy left its mark better…

Lakhia’s latest offering Haseena Parkar fails to impress. It is surely not on the list of recommended gangster films. Haseena Parkar is a superficial drama with no grit. The film has only glorified dialogues that has no real meaning to it. It’s better to enjoy your weekend with other gangster flicks over pizza!

The disappointingly shallow biopic is a testament to director Apoorva Lakhia’s penchant for making films on Mumbai’s underworld dons that ride on sensation over substance. You walk into the film, hoping to understand the controversial journey of a woman, who became the aapa (elder sister) or the Godmother of Nagpada, beyond her identity as Dawood’s sister. But all you get is a poorly written, acted and executed film that unintentionally victimises and thus justifies her warped sense of power under the pretext of ‘protecting her family’.

The film manipulates audiences to sympathise with Haseena Parkar. The crowd calls her desh drohi, she complains her children haven’t had food for a week, that she is facing interrogation from both, the police and her family. Most of all we are expected to feel sad for her because she faces injustice by the virtue of being Dawood Ibrahim’s sister, the same name she uses and abuses, in numerous extortion cases. Tch tch, so sad, really!.

Directed by Apoorva Lakhia, Haseena Parkar is an Indian biological crime film based on the life of Haseena Parkar. Haseena was the sister of terrorist Dawood Ibrahim and handled the operations of his crime syndicate in Mumbai. She died of a cardiac arrest in July 2014. 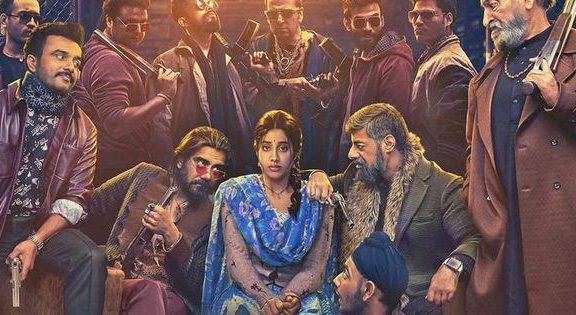