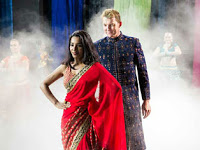 The problem is that the film – a love story in Sydney between a Indian single mom Meera and an Aussie-English teacher Will – is a tedious collection of clichés. We’ve got the overbearing Indian mother, the inquisitive Indian aunty, the single mom who is juggling career, parenting and matchmaking tactics by her friends and family, the arrogant Indian doctor suitor, the rain-that-leads-to-lovemaking scene and even the last ditch-airport chase. It’s an absolute slog.

Though it has the usual characters — a ‘groom seeking’ Indian mom (Supriya Pathak, funny) and a conservative Indian father (Akash Khurana, effective), the situations are far more real and thus, relatable. There are noaloo gobi jokes either. Meera isn’t seeking a wealthy Indian man settled in Australia, nor is Brett Lee a professional cricketer in the film. The breezy love story is realistic and so is the spontaneous humour, thanks to TK (Arka Das as Lee’s sidekick) and his witty one-liners.

UnIndian reminds me of cross-culture films like Bride and Prejudice and Bend It Like Beckham. While the first half of the film is easy on the eyes, the second half has a lot of melodrama, making it boring. The film isn’t void of typical Bollywood clichés either but the endearing romance between Lee and Chatterjee makes UnIndian a decent watch.

UNIndian, as a film, has its own share of pitfalls to negotiate. It occasionally resorts to contrived means to get around its loose ends. Yet, in the ultimate analysis, the film never trips irretrievably. Its pronounced desi inflection is well integrated into the plot of UNIndian. With a lead actress who knows her onions as well as anyone else in the business and who is on top of her game, here’s a film that has just enough spice not to err on the side of excess.

The title, used as an adjective, aptly describes the protagonist’s behaviour in this formulaic, romantic comedy, set in the Indian diaspora of Sydney. The narrative shuttles between portraying, “Indian culture,” how it is perceived and practised and the power of ICN — Indian Community Network around the globe.

Like most romcoms, UnIndian works best when it focuses on the pursuit of love – showing Will trying to win over Meera. But once the two get together it struggles to hold attention. UnIndian also doesn’t reflect too much on the significance of the partnership of Will-Meera and its impact on the community. Instead it is keener to look at the more mundane arcs such as Meera’s ex-husband secret and Meera giving professional advice to another Indian woman. UnIndian won’t bowl you over but it is that breezy film which has enough moments to make you chuckle and laugh.

A beautiful Indian single mother living in Australia causes a scandal in her family when she falls in love with a white man. !