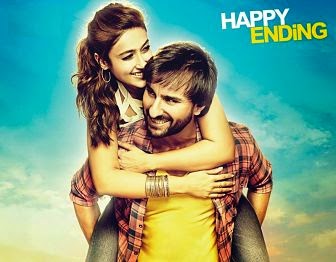 It’s easy to see why Happy Ending doesn’t work after all. This is a film that wants to be many things all at once – a rom-com between a fading star and the next big thing, also a clever satire on Bollywood. It’s overlong at 135 minutes, and on occasion dreadfully boring. I’m going with a generous two out of five for Happy Ending. You’ll only be truly happy at its ending.

Mostly, Happy Ending’s a fun film with a melodious, modern take on individuals and pyaar. It’s an NRI movie that side-steps dilemmas and pain. And it’s probably the first Hindi film where the heroine cheekily tells the hero, “Show your boobs!”, performed with polished elan. Wrapping Hollywood ribbons on a Bollywood heart, this is a nice ending – and a good start.

Raj Nidimoru, Krishna DK and Sita Menon have written a story and a screenplay which are very disappointing and very class-appealing. On the whole, Happy Ending is a dull fare, meant mainly for the good multiplexes in the big cities. But its fate in the ordinary multiplexes, in single-screen cinemas and in centres other than the big cities will be far from good. Overall, it will entail heavy losses to all concerned.

Happy Ending, at its core, is pretentious and doesn’t quite live up to expectations, save for Govinda, who lights up the screen with his mere presence and those legendary moves. In a film that every cast member is so desperately trying to fit in, he is the only one who actually manages to convince us that he truly belongs there and he knows it.

Happy Ending enmeshes the wildly absurd with the mildly funny to deliver two-and-a-quarter hours of harmless entertainment that does not overly try the audience’s patience despite the many holes that it is riddled with. If you expect Happy Ending to get somewhere, you are watching the wrong film. Do not expect the world from Happy Ending and you might actually find in it enough enjoyable patches to make a trip to the multiplex worth your while.

Happy Ending can hold your attention throughout its length except some not-so-necessary intimate scenes. There is enough in the story to provide you a good dose of entertainment, you just don’t need to expect too much. The film does exceedingly well on the craft front as it moves away from conventional techniques but fails to add a new dimension on the content front. But, you can always watch it for clever one liners and sharp jokes. It’s positively, certainly and definitely a fun film.

The Bollywood script getting written within this film somewhere starts tallying with the hero’s own story. This clever move allows us to flit between a formula pic and an unconventional rom-com. Sadly this is also one of the many reasons Happy Ending’s ending comes a good half hour before everything could’ve ended, for better or worse. But, as an audience, at no point do you totally lose interest. If you keep your expectations in check, this one is definitely worth checking out in the theatre.

Romcom seems like an easy genre to execute but clearly is not everyone’s cup of tea. With a good budget and good looking actor it’s easy to make a good looking film but it’s tough to make an entertaining one. Happy Ending is a decent one-time watch.

They seem to be struggling with the film’s plot mid way. While the first half of the film is enjoyable and bearable, it’s the second half which tends to drag at many points. The film shows deep traces of the hit American show ‘CALIFORNIFICATION’ and Saif’s own film HUM TUM. On the whole, HAPPY ENDING is a film which leaves you with a happy feeling. It drags in parts but is worth a watch, at least for Saif’s performance.