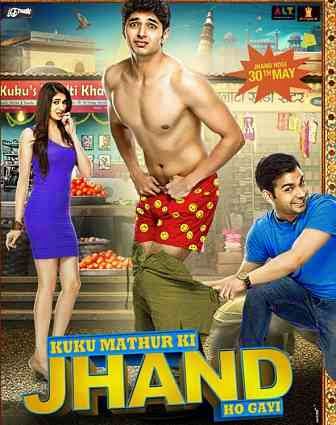 KUKU MATHUR KI JHAND HO GAYI not only boasts of a hatke title, but makes an attempt to provide humor and entertainment in the alternate landscape. Like DELHI BELLY and FUKRAY, the backdrop is Delhi, the storyline is simplistic and relatable, but the humor is not over the top. This one’s a drama-driven film, while the laughs are interspersed where necessary. In fact, debutant director Aman Sachdeva sets the plot in a familiar landscape, gives it a fresh coat of paint and gives the clichés a spankingly fresh look. On the whole, KUKU MATHUR KI JHAND HO GAYI is a light entertainer that’s simple-n-sweet, charming and most importantly, entertaining for most parts.

Vijay Kapoor and Aman Sachdeva have penned a story which was more suitable for a television serial. The screenplay is very childish. Actually, a few individual scenes are comical and funny but the overall impact of the drama is so dull that the audience is left wondering why the film had to be made in the first place. On the whole, Kuku Mathur Ki Jhand Ho Gayi is a dull fare and cannot hope to do much at the ticket windows despite some good comedy. Its very low cost is probably its biggest plus point.

Sachdeva’s plot is straightforward. The story doesn’t offer much, but it’s the jhund of characters that make you chortle with their spontaneous lines and lingo. Funny situations and scenes with quirky characters provide clean humour but that can’t substitute for the lack of a good, engaging story. Debutants Siddharth and Ashish are decent; and colony ka tota (read: hottie) Simran, as Kuku’s love interest, doesn’t have much scope. Watch this one only if a ‘little birdie’ tells you to. We mean a ‘Kuku’, alright.

It takes a while to get absorbed in Kuku and Ronnie’s life. The pace suffers in the second half and the songs don’t do much to improve the films appeal. Simran Kaur Mundi doesn’t have much to do and her track with Kuku is half baked. Also for those who aren’t familiar with the concept of being a ‘Jhand’, the movie doesn’t do much to explain the term. Too much north flavour do doesn’t have universal appeal. It’s a sweet film. Give it a chance.

The film ends up being a strictly average, and mostly bland, slice of Delhi life. There’s a great deal of Punajbbi Hindi, but that’s par for the course of this kind of template-y film. For variation, we get Bihari, from a guard and his ‘sari’-loving wife whom he has left behind in Darbhanga, and Kanpur Hindi, from Kuku’s ‘badmaash mama’. Sit.com territory, stretched out to accommodate a film.

The film’s title itself is so deterring that audiences won’t exactly be attracted to the name of it. And if they are, Kuku Mathur Ki Jhand Ho Gayi hardly has anything solid to offer to them. It’s a dull, flat film which doesn’t allow you a moment of fun. The romance doesn’t have any magic and the second half is so convolutedly scripted that doesn’t rise above tedious. The general quality of cinema in this country is deteriorating and films like these are a pile on to mediocrity.