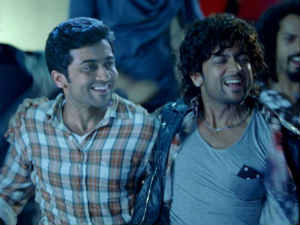 The first half is intriguing with its plot-twists, red-herrings and the barely-shown bond of the twins. But even here, the suspense is gone, because you’re shown who the culprit is.You expect fireworks in the second half, but this is where everything goes downhill. Despite the rich locations, magnificent sets, S Sounder Rajan’s sleek cinematography, the screenplay flounders in a morass of monotony.It looks like the director wanted to pander to commercial tastes and an intelligent screenplay but stumbled in the middle. The confidence evident in his previous ventures is sorely lacking here, and the whole conjoined twins plot has largely been wasted. Their relationship is very loosely explored, and the movie is not centred on them. In fact, it would have served as well had they just been siblings.Maattraan has a great premise, great characters and actors who could have pulled off a complicated story. Sadly, the movie never capitalises on these strengths. s

Suriya² is how the credits roll for Maattrraan ( Brothers in Telugu), the fifth double role by the actor after Perazhagan, Vel, Vaaranam Aayiram and 7aum Arivu. And thanks to him, it is double the performance and double the fun.In Maattrraan, Anand and Subha (writers Suresh and Balakrishnan), who are in charge of the story and screenplay, attempt to warn us about the dangers of genetic engineering and interfering with nature, but a crisper capsule would have had a stronger effect. The movie has a running time of close to three hours, and editor Antony should have persevered with the director to reduce it as a lot of time is expended on scenes that could have been easily sacrificed to make it a much more compact package. Or maybe Anand also needed a ‘Maattrraan’ (alternate) to step in when he lost his way.

Last week, the pains caused by ‘Siva Thandavam’ are yet to be healed for the Telugu folks and if you go for ‘Brothers’ it is nothing short of entering a boxing ring. This time you have a one plus one offer.The first half has few interesting sequences but the interval bang reveals the plot. Second half becomes a torture with dragged scenes and sometimes it looks like a correspondent documentary. Overall, this is a film which is not worth its hype and it might fizzle out soon. Bottomline: Better to spend time with your brothers than wasting time and money on this

Brothers is an action thriller film and Surya’s performance as conjoined twins is the main attraction of the movie.The story of Brothers revolves around a conjoined twins and KV Anand has written a brilliant script for the movie. He has also managed to have a tight grip on its narration. As conjoined twins, Surya has delivered a wonderful performance and it can be said that it is the best acting in his career and he is sure to bag a few best actor awards for it. He looks stunning in action and dance sequences. Overall, Surya and KV Anand combo rocks and their latest movie Brothers is a superb entertainer with rich production values and good story. It is good treat for this weekend and it is must watch movie.

Surya is back with Brothers, the dubbed version of his Tamil movie Maatran. Suriya with every film he is getting better always. He carries the entire film on his shoulders. He has shown the difference of the conjoined twins rightly in the body mannerism and voice modulation. He does everything perfectly. Kajal Agarwal is pretty and beautiful.Sachin Khedekar plays a very important role in this film.There are few romantic songs and comedy scenes between the conjoined twins in the first half. But the movie takes a serious mode in the second half and the climax is superb.