Overall, this is a film which starts off with a good intent, has a powerful idea but the process of execution and the lack of seriousness in the situations has hampered its chances. Editing during the first half was good as the sequences between Santhanam and Karthi were different and interesting. But at few places one could get a feeling that they got dragged. Moreover, it is a dubbed flick so not many will know the likes of Santhanam in Tollywood. At the box office, this could turn out to be a below average fare.Bottomline: This Shakuni’s dice is very weak…

First half of the film has limited appeal because the pace is sluggish and narration is flashback-oriented. Second half of the film is racy. Shakuni is a political story that is told in entertaining way without bothering much about logics and complexicities. Plus points of the film are Karthi and political satires. On the flip side, one-side orientation (no all-round orientation) might make the commercial appeal of the film limited. We have to wait and see how Shakuni works at box office.

The story revolves around how the protagonist fights all odds to win his lady love and his ancestral home.As far as the performances are concerned, Karthi steals the entire show with his performance. Praneetha is just a glam doll in the movie with very little to do. Prakash Raj, as always, is impressive.The director chose an excellent storyline with political backdrop, but could not narrate it properly.Watch the film only if you are a Karthi fan. Otherwise, you can surely give it a miss.

All the dialogues in the film had the Tamil scent and lacked local touch. The production values of Bellamkonda are good. The entire first half of the film is devoted to narration of silly points in the form of flashbacks. Second half takes fast pace for some time, but the director lose grip on the subject again. Remarks: Watch the film if you are a hardcore fan of Karthi. Otherwise, you can wait for the DVD as the film is not that exciting and interesting to watch by going to the theatre. The commercial success of the film depends on how could Karthi pulls audiences to the theatre.

Sakuni is a political drama with entertaining elements. The film opens on an entertaining note and doesn’t bother about the story until the interval point. Actual story starts in the second half and it is mostly about the political game that is played by the hero.Sakuni may appeal to the entertainment seekers. There were few decently canned scenes and humorous dialogues. But this film demands an engaging narration and that was completely missing. You may watch it if you have nothing better to do. 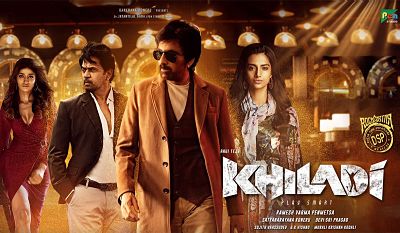