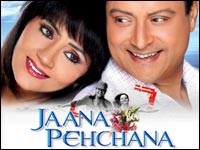 JAANA PEHCHANA is a sequel to ANKHIYON KE JHAROKHON SE, Rajshri production’s 1978 hit. The screenplay is shoddy, the plot, though interesting, never moves beyond a point and the end is amateurish. This movie is for old-timers who have soaked in the brilliance and freshness of the lead pair of that time. A newcomer, will not be able to make much sense, even though the film is replete with scenes from the old hit. In fact, almost three-quarters of the films is ANKHIYON KE JHAROKHON SE. It looks like the script was hastily gotten and executed with equal haste. What was the need when you have come 33 years later? You had all the time in the world.

.Somewhere in the ’70s the Barjatyas’ discovered their formulae Undying love, family needs before self-gratification, dire consequences for those earn money by unscrupulous means and all that blah. Even after thirty years, they obviously believe things haven’t really changed. It is these good-as-gold characters with outdated values in their simplistic uncomplicated world which make the film unbelievable. But those eternal optimists — who are out there waiting for their second chance, believing their knight in shining armor is just around the corner — will definitely appreciate Jaana Pehchana. And the Barjatyas will continue to make similar films no matter how passé the plots appear to us.

The sequel Jaana Pehchana is a mundane plot of falling for the lookalike of your lost love, witnessed zillion times in Bollywood from Kasme Vaade, Agar Tum Na Hote to Kaho Na Pyaar Hai .The film is replete with regular Rajshri brand elements like conflict-free screenplay, convenient writing and slow pacing. The sequel’s basic brainchild of falling in love with the facsimile, in a way, stresses on the film’s shallow belief that love is more of physical attraction. Irrespective of whether you have watched Ankhiyon Ke Jharoke Se or not, it’s no point seeing the sequel. Eyes wide shut for this!

Jaana Pehchana’ that seems more like a remake than a sequel to the film that was released 33 years back.Sachin is the screenplay, story writer, lead actor and director of the film. He puts up a mediocre storyline of falling in love with the lookalike of your lost love that seemed to be the most obvious for a sequel. First of all coming out with a sequel after 33 years is way too long and that too with a mediocre storyline does not make much sense. While narrating the flashback a lot of scenes and songs from the original are repeated, so for those who haven’t seen the original, the story seems complete.