Home » Uncategorized » I Am Kalam Review 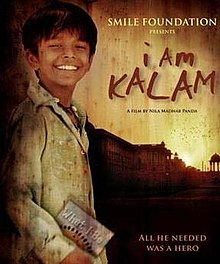 I am Kalam Reviews

Inspirational and humorous in equal measure, I Am Kalam is the heartwarming story of a poor boy who aspires to learn; a young dreamer determined to rise above his humble roots and carve his own destiny. Directed sensitively by debutant Nila Madhab Panda, I am Kalam avoids melodrama while delivering an important message about children and the importance of education.I’m going with three-and-a-half out of five for I Am Kalam. It’s a charming little film that’ll leave you wiser and happier. Don’t miss it.

I AM KALAM is engaging and entertaining in its own way and it doesn’t make the kids act or behave like grownups. In fact, I AM KALAM is more like a fantasy that tells the story of a pauper and a prince, though this one is set in the present day. One of the reasons why I AM KALAM works is because the kid, who works at the roadside dhaba, represents millions of kids who are deprived of education and can become responsible citizens if nurtured and shown the right path. On the whole, I AM KALAM is an inspiring and motivating film that deserves to be encouraged. Recommended! I AM KALAM is charming and fun and at the same time, it touches topics such as poverty, abuse and child labor most effectively, without being dark or gritty.

It’s inspirational, intelligent, topical and entertaining too. More importantly, it brims over with heart and soul, leaving no one untouched with its simple message of providing an equal opportunity — specially the right to education — to every child in the world. Yes, I Am Kalam finally articulates a near-perfect children’s film, with an equal appeal for adults too.

I Am Kalam is a welcome addition to the children’s film genre which has often received short shrift from mainstream Bollywood. Playing out like a documentary with scant recourses at its disposal, as if screaming to alienate itself from the commerce that defines today’s cinema, I Am Kalam is a film with straight-from-the-heart directness, with a boy as protagonist whose drive towards being a tie-wearing ‘bada aadmi’ gives this film a sense of purpose, ambition and hope.

I Am Kalam is a sure-footed cinematic essay that delivers its essential social message without working up the sort of gratuitous preachy froth that films of this genre often end up doing.I Am Kalam draws its lifeblood primarily from the innate authenticity of its tangible characters and the sustained evenness of its pragmatic tone.I Am Kalam shows how beautiful small can be, especially when the heart is in the right place and the mind is clued in.

Kalam comes from a long line of such little fellows, and he grabs our attention with his mile-wide smile which lights up the screen, and his belief in himself. He knows that he’s not going to be serving ‘khana’ and ‘chai’ to tourists who stop by at the ‘dhaba’ run by Bhati ( Grover) all his life. Mayar, who is a real-life slumchild, is endearingly life-like. ‘I Am Kalam’ is a big smile of a movie. You watch, and smile right back.

I am Kalam is one of those rare films that is simple and yet very moving. It shows in an absolutely non-preachy way that dreams do come true. And it’s karma and not kismat that helps in fulfilling one’s dreams. The narrative includes many brilliant moments that you’ll remember for a long time. It also tackles the menace of child labour in a very mature way. I am supremely impressed by I AM KALAM. Watch this film made with lot of heart for its poignant story-telling and incredible performances.

What’s Good: Master Harsh Mayar’s natural performance; the well-intentioned subject; the cinematography.What’s Bad: The slow pace of the narrative; the botched climax; lack of emotions in the drama.Verdict: I Am Kalam will get critical acclaim and appreciation from the classes but its box-office prospects are rather dull.

‘I Am Kalam’ totally lives up to the credentials of its title. The dream in Chhotu’s eyes,  who calls himself a reflection of Dr. Kalam, touches the right chords. Impressive and awe-inspiring dialogues, excellent meaningful music and brilliant performances are the strengths of the film. Predictable storyline, poor essaying of Gulshan Grover’s character who is the only star attraction, are the drawbacks of ‘I Am Kalam’.On the whole, if you have a taste for good and sensitive cinema, ‘I Am Kalam’ is surely a treat to watch.

More of a documentary, ‘I Am Kalam’ teaches that more than your fate it’s your Karma that matters.The film has no breaks, and is an inspiring story and a commendable attempt by director Nila Madhab Panda. But there is a possibility that a must watch for all classes and ages, ‘I Am Kalam’ might be seen as a multiplex film.