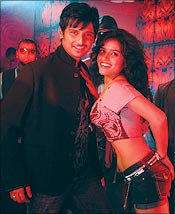 Ko (King), directed by K V Anand, who gave the 2009 blockbuster, Ayan, manages to satisfy most of the criteria of a summer entertainer; there’s a little bit of action, humour, political gymnastics, treason, betrayal, angst and the mandatory romance to satisfy audiences. And for what it’s worth, it takes you along on a spicy ride. K V Anand’s screenplay moves swiftly during the first half, courtesy the dialogues, and lags slightly in the second. Still, with its basic plot of politics, it has enough twists and turns to keep you occupied. Best of all are the light touches of sarcasm and humour that make it work. Go for it.

Hat’s off to KV Anand. He has done the impossible; by making a film which is realistic at the same time has all the packaging’s of a commercial entertainer. Anand is the new age Shankar and his Ko will surely satisfy all sections of the audiences.For an audience numbed by predictable Kollywood potboilers week after week, here is an original offering from KV Anand, a fearless filmmaker who doesn’t insult your intelligence. He is able to cater to the needs of both the elite as well as mass audiences, which should be applauded.

After a critically-acclaimed ‘Kana Kanden’ and a commercial success in ‘Ayan’, Anand is back in style with his most autobiographical work in ‘Ko’ (which means king or leader in Tamil). Anand, who started his career as a still photographer and moved on to working in newspapers and magazines, positions his main character as a photographer in a daily newspaper. With ‘Ko’, director Anand gives notice of his immense talent once again, making a movie that is all set to lord over the box office this summer!

The movie brings in picture the real and soft nature of the media persons, where as on the other hand media person are always portrayed as demi-gods. The thing which deserves a special mention is the narrative technique of the movie. The technique is very simple but potentially explains the complication of a photojournalist. The film manages to do one very crucial thing: it evokes your sentiments. You feel empathy, rage, helplessness, and triumph at every step of the way with the journalists.

The director has aptly mixed intelligent and commercial cinema in Ko. The film making is nearly flawless and excels in places where he brings in slice of life incidents to invoke humor. The events that hold the film together are fresh and albeit a straight forward story, it offers some interesting twists and turns that makes the audience eager for more. The most admirable aspect is the fact that despite the slumps in narration, the film manages to engage and has us hooked to the proceedings from the word go and carries us to an interesting and intelligent climax. The twist in climax is the biggest plus. Overall, Ko impresses, entertains and is likely to click with all kinds of audience.

On a whole KO is brave and pacy as the shown in the trailers and promos. One can’t move his eyes from the screens as the film engages the audiences with a well designed story. As confessed by KV Anand, KO is definitely double of Ayan. The film is surely a great entertainer and you will not get bored at any given point of time. Thanks for the entire team for giving a out and out chilling entertainer in this hot summer.
Quick Take: Go Book your Tickets, don’t try to give a miss!

Unlike other movies of this genre, where mediamen are shown almost demi-gods, here Anand brings out the human element in the hearts of the scribes. But cinematographer – director K V Anand, who started his career as a photojournalist, has taken it in his stride, drawing perhaps instances from his real life to render a movie that is engrossing, entertaining and racy.The movie  is audacious and pacy as the promos made us believe. The film manages to do one very crucial thing: it evokes your sentiments. You feel empathy, rage, helplessness, and triumph at every step of the way with the journalists.