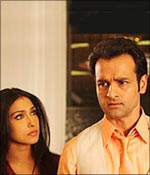 A purposeful film that ends up as pulp, Karan Razdan’s take on domestic violence is too long drawn and too verbose, with almost unending courtroom sequences, to keep you engaged. Also, the violence hardly comes through, even though Rituparna, the wronged wife, sheds endless tears while narrating her tale of woe. Well-intentioned, yes, but too straight, too talkative and too flag-waving, Mittal versus Mittal is more for the sundry committees on women atrocities than for the new age viewer.

It’s the subject material of Mittal vs Mittal that takes you by surprise, especially the sequences where the husband commits marital rape, night after night. In the past, Matrubhoomi, Daman and Provoked have tackled similar issues. While Mittal vs Mittal makes a sincere effort to be an eye-opener, it loses focus midway after it gets formulaic. At best, Mittal vs Mittal is a solid idea that doesn’t come across as strongly on celluloid.On the whole, Mittal vs Mittal is relevant, but is bogged down by mediocrity.

There have been many films made on rape and s**ual violence. Most of them hope that depiction of violence will help to titillate the audience. Mittal Vs Mittal also sets out with this objective but the audience is more likely to get repulsed than titillated. Rohit Roy appears more like a buffoon rather than looking lecherous. Try as she might Rituparno Ghosh does not look like a 25-year old. Despite clever camera angles, mood lighting and intense hard work by the cinematographer she still looks middle-aged.The film ends on a predictable note but do not expect it to register with the audience. Most people will be happy to exit the auditorium. The film also has an obligatory ‘item’ song. But even this song fails to make an impact. Do miss this film unless… Sorry, whatever the personal circumstances this film is best avoided.

This movie is basically B-grade version of a common emotional pornography. In Hollywood the genre is termed the “fem jep” (females in jeopardy). This is where audiences get off on feminine marriage ordeals, rape, battering, domestic violence. The viewer feels goodness in the heart than guilt, given the images are overtly meant to repulse you, not titillate. The disgust is made public. The delight remains secret. If only all this were filmed better, the movie would’ve actually found enough repressed takers.I know the makers of this film. I know legalising genuine pornography in this country will find them a more legit job in the business. About time we did.