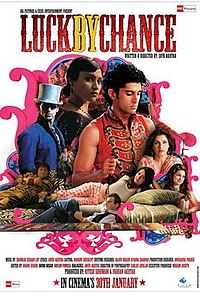 On the whole, LUCK BY CHANCE is an outstanding film in all respects. A magnificent outing from the producers of ROCK ON!!, LUCK BY CHANCE is sure to prove an extremely lucky and rewarding experience at the box-office. Strongly recommended!

A significant debut by director Zoya Akhtar, Luck By Chance is heartwarming and heart-breaking in equal measures; look closely at those layers beneath the laughs. An impressive achievement both in writing and direction, the film is full of witty moments and sharp observations that stay with you, starting with the opening credits sequence which is the best I’ve in years. it’s that rare Hindi film that deserves a repeat viewing just to savour its charm all over again.

The highpoint of the film are its performances. Both Farhan and Konkona are complete naturals before the camera, just as Rishi Kapoor and Dimple Kapadia prove that vintage never does lose its flavour, does it! The jibes are gentle, the tenor is fond, yet firm. But most importantly, the characters are completely real: feisty and flawed, even as the end is exhilarating.

After Rock On!!, Farhan Akhtar is an actor you look forward to. And he’s unpretentious and a likeable natural once again. Konkona Sen-Sharma is amazingly flawless. She even carries off a last, very long shot – obviously inspired by George Clooney in Michael Clayton – perfectly. For the entire acting crew, the page-turner script and the sparklingly perceptive direction by Zoya Akhtar, here’s your one big lucky ticket. Beg, borrow or steal.

Zoya Akhtar’s crisply-written and keenly directed debut showcases Bollywood for what it is, with all its manipulations, double-standards, glamour, quirks, cliches, shallowness, superstitions, struggles, clannish mentality and ever-changing priorities acting as way of life.

Luck, they say, is an important factor in the film industry. But talent is equally important. Thoughtfully, Zoya Akhtar doesn’t rely on plain chance in her directorial debut but exhibits immense aptitude while largely highlighting the significance of fate in films.Luck By Chance highlights how the film industry give regards to everything else but the story when making a movie and ironically weaves a fascinating story using that paradox.

Quite like Farah (who made Om Shanti Om), Zoya too draws upon her insight into the Hindi film industry and gives us a gem called Luck By Chance.Watch the film for Hrithik’s dance, Konkona’s performance and all the guest stars. Zoya Akhtar shows just how a film should be made.

It’s touching at times and at times, a spoof. It drags, as well as amuses.For an audience fed with a daily diet on the working of the film industry through articles and interviews and ‘scoops’ from ‘sources’ not only in film glossies but in dailies as well, this is nothing new. Commercially, this film will find it tough to break the box office shackles. If you view it as an Art film, you won’t be disappointed.

Luck by Chance (LBC) highlights the many quirks of the Hindi film industry, like film productions run like family enterprises.Debut writer-director Zoya Akhtar revels in telling us almost all, but leaving out several things unsaid. It’s these subtleties and lack of spoon-feeding the audience about how they are supposed to feel about a character, that’s likely to affect the film’s longevity and repeat viewings. …but what a film!