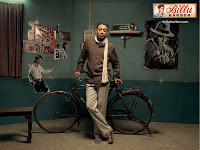 Billu Barber has a rocking start to it with songs like ‘Marjaani’ and ‘Love Mera Hit Hit’ that are guaranteed chartbusters in the making. Though ‘Ae Aa O’ is the only number that doesn’t quite make a mark, ‘Khudaya Khair’ brings in a nice feel-good touch to it which keeps the flag high for Billu Barber. On the other hand, ‘Jaoon Kahan’ and ‘Billoo Bhayankar’ add on to the situational flavor. While the soundtrack should work well for the film, we are not looking at a Race or a Jannat or a Singh Is Kinng that are being played even till date. Still, from the popularity perspective, Billu Barber should go the Kismat Konnection and Golmaal Returns way by being reasonably successful

Billu Barber’s score will work. But it’s not a Race or Jab We Met. Pritam has however given us two genuinely rocking party numbers in Mar Jaani and Love Mera Hit Hit. The other numbers are also good fillers coupled with the half a dozen remixes. But what could have been Shah Rukh Khan’s first big soundtrack of 2009, ends up becoming just another Pritam album.

But like the supplementary special appearances in the film, there are too many complimentary tracks on the album. Out of 15 numbers, merely 6 are original compositions. Billu Barber needed some trimming for reduced repetition.
Song of the album: You Get Me Rockin & Reeling (Remix) and Billoo Bhayankar

That’s the problem with Billu Barber. It’s like a hastily-recycled compilation of Pritam oldies, which is jarringly familiar and mostly uninventive.

To sum it up, the audio album of BILLU BARBER is like a gift box of assorted chocolates and candies to cater to different tastes, moods and sensibilities. The album has something to appeal to almost every type of listener, be it item numbers, rock compositions, soulful tracks or folk.