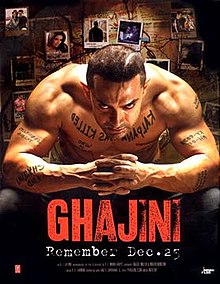 From all the reviews across the web

The high point of Ghajini is Aamir Khan’s class act of the hero who switches from a shy, taciturn tycoon who finds love in the alley — with an ekdum ordinary girl — to a vulnerable killing machine who mauls his prey like a wounded tiger.A man who suffers from short term memory loss must not only remember the horror of his past, but seek out his beloved’s (Asin) killers too and finish them off.All in all, Ghajini is a thoroughbred Bollywood film which celebrates the formula with panache. Enjoy the unadulterated desi!

Watch Ghajini, though. Watch it for Aamir Khan, because I don’t think I’ve seen him having this much fun as an actor in a very long time — and that’s always great to see. The film itself is impressive in bits, with some terrific sequences, but the romance takes away its thunder. It is a breezy watch that could have been a really crackling one, and while there really is timepass fun to be had, the overwhelming feeling is one of regret.For what can you say about a film on memory loss that turns out forgettable?

It’s an old-fashioned entertainer with a half-convincing plot, packed with enough gratuitous violence to qualify as a B-movie really; and like the most popular B-movies ever, the biggest strength of Ghajini lies in the fact that it’s a fast-moving roller-coaster ride that seldom gives you a moment to stop and think how stupid it might actually be.

On the whole Ghajini is not a boring film by any stretch of imagination and packs in enough punch through its running time. But the massive buildup does not translate into an exceptional cinematic experience. It is much ado about nothing. Aamir is both the film’s biggest strength as well as weakness. His presence and star power take the film to another level. The brownie points the film earns are only thanks to Aamir who saves it from being just another action flick. It’s his most commercial performance in a long time. One that doesn’t aim for greatness but is wholesome nevertheless.

Finally though, Ghajini’s greatest strength lies in its leading man — Aamir Khan. Like he mentions during a conference scene in the film, ‘There’s a difference between convictions and arrogance.’ His performance is dripping with conviction and endless glucose bottles of energy. Khan looks like a man possessed with fury, consumed by unbridled anger and heartbroken beyond repair. His transformation from a articulate tycoon who shares a frame with India’s former President rock solid.Piece of advice: Don’t go looking for mementos and souvenirs, you’ll have fun. Of the hard-hitting kind, that is.

The film clocks three hours and the audience, who love typical Bollywood films, and are starving for the same, loved every minute of it. If violence revenge and a little bit of romance is what you like, GHAJINI is what you will love. In the first few days, this film will break box-office records for the year.

There is no good or right way to put it. Ghajini is certainly a film that you just have to watch. It’s this fantastic action thriller that comes only once and needs to be seen to be believed. Go see Sanjay Singhania, he’ll teach you a thing or too about revenge.

The director, AR Murugadoss succeeds to keep up the suspense throughout the film. The film revolves around Aamir’s character Sanjay Singhania, who has a sad past and a violent present. After Shah Rukh’s Surinder Sahni act, it is Aamir’s Sanjay Singhania, who is to rule the psyche of viewers. A winner for sure. Four cheers!

To sum up, Ghajini is one of the very best entertainers of the year. Its Aamir Khan’s show all the way and you cannot afford to miss this. Don’t look for logic behind every scene, it’s not an intelligent film. It’s a film which ensures total entertainment for the 3 hours+ you spend watching the movie which is a sure shot blockbuster at the box-office.

Aamir Khan has done a wonderful job. Be it the bold, energetic business magnate or the wild chaser Aamir has stolen the show. Asin seems full of energy. The two seem to make a real good pair.Ghajini is a must watch for an Aamir Khan fan and a fulltu paisa vasool movie for a Bollyowod buff