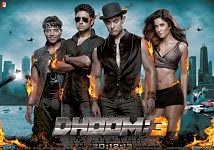 On Christmas day a large number of movie screens are closed in all international markets and hence lower box office numbers are expected for 6th day.

Breakup: ( Not all territories are up to date)

Riding on a Christmas holiday the 6th day has been huge too Dhoom 3 now looks all set to beat box office records in India by second week itself. It looks set to hit 450 Crore + Worldwide and 250 Crore + in India.

Overseas:
Driven by higher revenues from IMAX screens as well as wider release in overseas Dhoom 3 is going to challenge the record held by 3 idiots which is the highest grossing Bollywood movie overseas with a gross of 26 Million dollars. Total overseas was $13.11 Million in 5 days while in USA & Canada  alone Dhoom 3 had reached 4.553 Million dollars comparatively Chennai express did 5.307 Million in its lifetime.
It is also releasing in some smaller markets on following dates:
Morocco 25 Dec, Lebanon 26 Dec, Egypt 1 Jan, Romania 9 Jan, Germany 9 Jan, Peru 16 Jan. which will add to the gross.