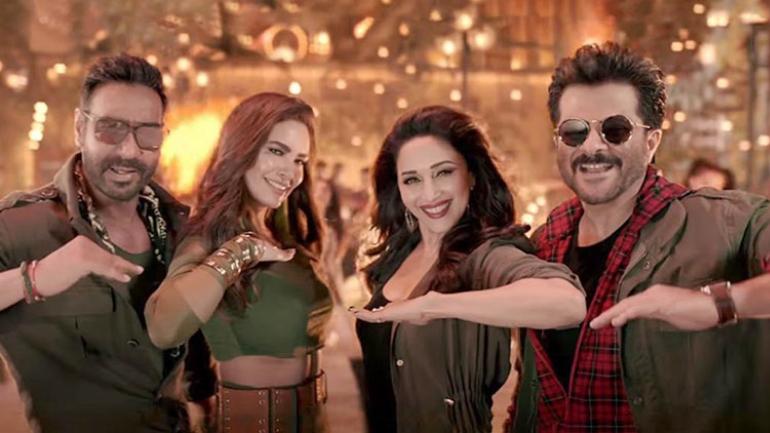 No one is looking for logic here… Focusses on humour and entertainment… First half hilarious… Second half could’ve been tighter… Loaded with clean humour… Families and kids should like.

I want to say here that I’m not against comedies that require complete suspension of disbelief. But even that requires thought, clever writing, and a lightness of touch. Total Dhamaal has none of those things. It’s a cash-grab film that believes ‘bigger is better’. Alas it’s not. From multiple remix songs, to the low-IQ racist and sexist humour, and a reliance on familiar gags and tropes, this is lazy, cynical filmmaking. I’m going with one-and-a-half out of five.

On the whole, Total Dhamaal is truly total dhamaal. It is a thoroughly entertaining joyride and will keep the audience in splits, and the producers and distributors smiling from ear to ear. The classes may not like the comedy fare but families, kids and masses will love the film which will prove to be a paying proposal for all concerned. The film will definitely join the 100-crore club and will surpass that figure quite easily.

Some actors stand for quality. Ayushmann Khurrana, for instance, distinguishes himself from his peers through his discretion in picking scripts. Having Khurrana on the poster makes us expect something unique and intelligent. By that measure, Ajay Devgn is the Anti-Khurrana, an actor who has become a byword for mediocrity. Devgn can act — he shone in Omkara, Company, Gangaajal, Kachche Dhaage, The Legend Of Bhagat Singh and Hum Dil De Chuke Sanam — but of late, he appears exclusively in movies that make critics like me question our careers.

Not only film’s screenplay, but even most of the punches are predictable. For an adventure comedy, Total Dhamaal also falters in many scenes with shoddy computer graphics. While the first half is breezy, second half is overburdened with too many characters in a weak plot. Director Indra Kumar misses out on the opportunity to generate steady stream of humour. Given the ensemble cast, this film had the potential to be a comic roller coaster ride. However, the fact that the film is slapstick is not a problem, what brings it down is poor writing and execution.

If you swear by comedies like Great Grand Masti and Double Dhamaal, then you just might enjoy this one. Else find something better to do with your time this week. Total Dhamaal, starring Ajay Devgn, Anil Kapoor and Madhuri Dixit-Nene, is the third film in the Dhamaal franchise. However, the film fails with its comedy and punch-lines and leaves you with a headache, says our review.

While the first half where the crazy bunch try to find their way towards the hidden stash is enjoyable, the second half set mostly in a zoo falters considerably. Suddenly, the morally-bankrupt bunch develop a moral compass and embark on this mission to save animals who are being poisoned by a bunch of greedy businessmen.If you are looking for a comedy that thrives on nonsense, more than sense, then you have signed up for the right ride.

WAfter the euphoria of last week’s release, Gully Boy, comes the downer. If you’ve watched the trailer of Total Dhamaal, you know what to expect – over-the-top humour, tired Bollywood clichés of bumbling sidekicks and lungi-clad nariyal paniwalas, and the mandatory peppy item numbers set to 80s remixes. Indra Kumar’s homage to the 1963 cult comedy, It’s a Mad, Mad, Mad, Mad World, has a first-rate ensemble cast embroiled in a madcap chase to be the first to find a 500-million rupee jackpot stashed away in a zoo. The laughs are few and far between and what’s worse, you can see them coming from a mile away.

On the whole, TOTAL DHAMAAL is a ‘leave-your-brains-behind-at-home’ entertainer with its share of funny moments. If you are not looking for wisdom and rationale in a light-hearted entertainer, then this movie is definitely for you. At the box office, it’s only the masses who might give the film thumbs up and they’ll majorly determine the fate of the film from Monday onwards.

The easiest route for comedy in recent years has been to follow the route of sex. What works for Total Dhamaal, just like the original, is it does not fall into this trap and refrains from sexual innuendos. It doesn’t rely on vulgar one-liners or double entendres and yet is packed with some funny moments.What the film guarantees for two hours is clean entertainment – a film with dialogues that can be seen with your full family sitting next to you. It is paisa-vasool and won’t fail to entertain you.

“Gully Boy” is a film about a 22-year-old boy “Murad” (Ranveer Singh) from a ghetto in Mumbai, India. The son of a driver, his parents worked hard to get him educated so that he could have a white collar job. Meanwhile, Murad realizes his calling to be a rapper. Authentic Hip Hop in India is a recent phenomenon and like anywhere else in the world, is rising from the streets. Art is a distant dream for the colonized poor of India and this story is about Murad’s journey from realizing his love for rap and chasing his dream to inadvertently transcending his class. The film showcases street rap from the crevices of Mumbai’s by lanes. The poetry is conscious of the city’s socio-economic fabric and highlights the challenges faced by the disenfranchised youth in the minority population.