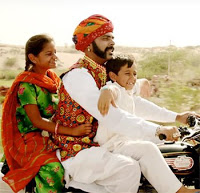 Director Nagesh Kukunoor’s delightful new film Dhanak rests on the idea that if you want something badly enough, the whole universe conspires to make it happen.I’m going with an easy three out of five for Dhanak. It’s a crowd-pleaser that drives the point home about seeing with your heart instead of your eyes. Shrewd message for a film that’s not perfect, but is all heart.

The screenplay is a weak brew that relies solely on the humour of its sharp dialogues and the charm of the child actors. Hetal Gadda and Krrish Chhabria are crackling together and it is their camaraderie that shines when the film doesn’t. Even though Dhanak stays mysterious till its last scene, it gets too repetitive to hold your interest. Its soulful music, heartfelt style of narration and of course, delightful kids can’t make this half-baked story soar.

The second half did seem a bit slow in comparison to the first. Also, the back story of how Chotu loses his eyesight is hard to understand. The makers could have worked more in that area. But these elements do not hamper the flow of the story or its magic.To have a movie revolve around just two characters is hard but Kukunoor does it and how! He proves yet again why he is a filmmaker to reckon with.In the recent years, I can’t remember watching a film with a big smile on my face throughout. You’ll probably feel the same after watching Dhanak.

Dhanak paints a portrait of hope in which the magic of popular Hindi cinema — Pari and Chotu are engaged in constant banter over who is more puissant, Shah Rukh or Salman — and the power of a child’s unbridled imagination merge in a marvellously infectious manner. The screenplay is the star in Dhanak. With Hetal Gada and Krrish Chhabria drawing the audience effortlessly into the tale, it takes on magical dimensions. And, of course, it is impossible not to mention the ever-dependable Vipin Sharma in the role of the deeply concerned but powerless guardian whose own dreams are no less touched by benign madness.Do yourself a favour: make sure Dhanak is a part of your plans this weekend.

Unlike most road movies, Dhanak is not about any inward journey for its lead characters. Undeniably innocent, their approach to life is pure and full of trust. They believe in a house with walls of sweets, and sing folklore with foreigners. They fight to prove Shah Rukh’s supremacy over Salman. And, to walk across Rajasthan is just another sport for them. Thanks to its use of fusion, Dhanak slowly grows on you. And, who knows, Chotu and Pari may help you in shedding that tough exterior you’ve been burdened with.

A little boy, who has lost his eyesight, and his sister Pari set out across Rajasthan on foot. Their mission, spearheaded by Pari’s determination, is to restore Chhotu’s sight. It’s hard not to be moved by these kids and their heart-warming story.

There are certain sequences, like the one involving veteran actress Bharati Achrekar as a blind visionary, that seem too contrived and convoluted.A lot of credit for making this film so endearing goes to the child actors’ performances. While Krrish with his childlike charm steals your heart, it is Hetal who stands out with a stunningly natural performer. The rest of the cast provide good support. Music is fabulous too.

Dhanak is a delightful film that comes straight from the heart. An extremely endearing brother-sister tale, this film has a lot to offer when it comes to human nature and emotions

Pari (Hetal Gadda) has promised her little blind brother Chotu (Krrish Chhabria) that she’ll help get his eyesight back before he turns 10. When she spots her favorite star Shah Rukh Khan on the poster for an eye-donation drive, she is convinced her hero will help her on her mission.